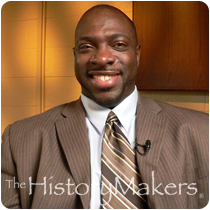 Research physicist Darnell Eugene Diggs was born on May 20, 1970, in Tuskegee, Alabama to Janie Mae Davenport Diggs and John Diggs. Diggs and his twin sister were the youngest in a family of fifteen children. Diggs attended Pike County Elementary School and Pike County High School, where he was registered in advanced placement classes and played the trumpet in the school marching band.

Diggs followed in his family’s tradition by enrolling at Alabama A&M University in Normal, Alabama. While a freshman, he majored in business management and sang in the university choir. Diggs changed his major to physics at the end of his sophomore year after performing well in a physical science class and graduated with his B.S. degree in physics in 1988. Inspired by members of the National Conference of Black Physics Students and the Society of Physics Students where he served as president, Diggs remained at Alabama A&M University where he earned his M.S. degree in physics in 1997. After internships at the University of Wisconsin and the University of Alabama in Huntsville, Alabama, Diggs earned his Ph.D. degree in physics in 2001. Diggs was hired by the United States Air Force Research Laboratory as a research physicist in 2002; there, he worked to improve polymer-based electro-optic modulators that provide critical advantages over devices made from other materials. Through his work, Diggs collaborated with Tyndall Air Force Base, Georgia Tech Research Institute, the Army Strategic Missile Command, the University of Dayton, and Alabama A&M University.

In 2004, Diggs received the Black Engineer of the Year Award in the category of Promising Scientist in Government. Science Spectrum Magazine named Diggs one of the 50 Most Important Blacks in Research Science in 2004, and a Top Minority in Science in 2005. The World Year of Physics 2005 also recognized Diggs as one of five Distinguished African American Physicists. In 2006, Diggs was invited to speak at the U.S. Air Force & Taiwan Nanoscience Initiative held in Taipei, Taiwan. In 2007, he became president of the Dayton Alumni Extension for the National Society of Black Engineers. Diggs also served as an ordained Elder in the Church of God in Christ.

Darnell Eugene Diggs was interviewed by The HistoryMakers on February 25, 2008.

See how Darnell Eugene Diggs is related to other HistoryMakers
Donate Now
Click Here To Explore The Archive Today!