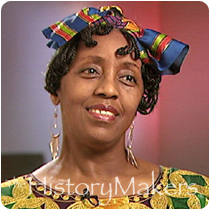 See how Darlene Blackburn is related to other HistoryMakers
Donate Now

Dancer and choreographer Darlene Blackburn was born in Chicago, Illinois on July 12, 1942. Her mother, Cora, was a homemaker and her stepfather, Richard, worked for the Ford Motor Company. The oldest of four children, Blackburn attended the Chicago Public Schools, earning her high school diploma in 1960. She later returned to school, earning her B.A. degree from Northeastern Illinois University in 1984 and her M.S. from Chicago State University in 1987.

Blackburn began dancing at an early age, and was heavily influenced by some of her teachers, including Jimmy Payne, Tommy Sutton, Lucille Evans and Tommy Gomez. In 1963, she first started becoming aware of her blackness through Phil Cohran, her life mentor, and that same year she founded the Darlene Blackburn Dance Troupe. Influenced by Margaret Burroughs to study ethnic dance, Blackburn traveled to Jamaica in 1967, studying with the Jamaica National Dance Company. She continued to study foreign dance techniques, spending time in Ghana and Nigeria in the late 1960s and early 1970s. Returning to the United States, Blackburn became the Artist-in-Residence at Purdue University in 1974, and she remained there until 1976. The following year, she, along with ten members of her dance troupe, were invited to Lagos, Nigeria, to participate in the Second World Black and African Festival of Arts and Culture. Following the enthusiastic response to their performance, Blackburn was invited to become the Artist-in-Residence at the University of Calabar in Nigeria, where she remained for the next three years. In 1983, Blackburn and her dancers began working with Urban Gateways – an arts education agency - in Chicago, and over the next few years they sent her throughout the Caribbean to study dance.

Blackburn has worked as a dance instructor at a number of institutions, including the Calumet Career Preparatory Academy, the Chicago Boys and Girls Club, the Goodman Theatre and Mostly Music, Inc. She has also served as choreographer for a number of productions, including “Benito Cereno” at the Goodman Theatre and “The Lion and the Jewel” at the University of Chicago. She has also been honored numerous times, including receiving the Outstanding Achievement in Dance award from Ladies of Distinction and the Alyo Award from the Muntu Theatre of Chicago.

See how Darlene Blackburn is related to other HistoryMakers
Donate Now
Click Here To Explore The Archive Today!