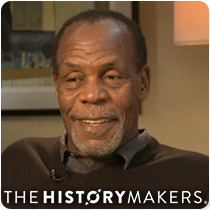 See how Danny Glover is related to other HistoryMakers
Donate Now

Actor Danny Glover was born on July 22, 1946 in San Francisco, California. His parents, Carrie and James Glover, were both postal workers and active members of the NAACP. Glover was a student at Daniel Webster Elementary School and Roosevelt Middle School. He graduated from George Washington High School in 1964. Glover went on to attend San Francisco State University in the late 1960s, where he played a role in the 1968 student strike, which led to the creation of the first ethnic studies department in the country. Glover went on to work for the City of San Francisco as an evaluations specialist and program manager in the Model Cities Program from 1972 to 1977. Glover trained as an actor in the Black Actors’ Workshop at the American Conservatory Theater in San Francisco, as well as with Jean Shelton at the Shelton Actors Lab.

Glover’s career as an actor began in college, where he acted in a play by artist-in-residence Amiri Baraka. He went on to act in his first feature film, Escape from Alcatraz in 1979. Glover has been noted for his roles in The Color Purple, the popular Lethal Weapon series (1987, 1989, 1992, and 1998), Predator 2 (1990), To Sleep With Anger (1990), and Angels in the Outfield (1994). He served as a narrator of the animated films of The Prince of Egypt (1998), Antz (1998), and Our Friend, Martin (1999). In 1994, Glover co-founded the Robey Theatre Company, a Los Angeles-based non-profit with the mission of developing new plays about the Black American experience. In 2005, Glover co-founded Louverture Films, a company expressly dedicated to production of socially-conscious films from around the world. As a humanitarian, Glover has lent his voice and aid to the American Postal Workers Union, United Auto Workers, and Service Employees International Union, amongst many other causes.

Glover was the recipient of countless awards and honors, including the BET Humanitarian Award in 2004, an NAACP Image Award – Chairman’s Award in 2003, the 2002 Marian Anderson Award, several NAACP Image Awards for Outstanding Actor, an Independent Spirit Award for Best Male Lead in 1991, and a 2011 Pioneer Award from the National Civil Rights Museum. Glover also received the prestigious Medaille des Arts et des Letters from the French Ministry of Culture and was honored with a tribute at the Deauville International Film Festival in 2011.

A noted humanitarian, Glover served as a Goodwill Ambassador for the United Nations Development Program from 1998-2004, during which time he focused on issues of poverty, disease, and economic development in Africa, Latin America, and the Caribbean. He was a UNICEF Ambassador.

Glover lives in San Francisco with his wife, Eliane Cavalleiro. He has one daughter, Mandisa Glover, from a previous marriage.

Danny Glover was interviewed by The HistoryMakers on December 20, 2015.

See how Danny Glover is related to other HistoryMakers
Donate Now
Click Here To Explore The Archive Today!