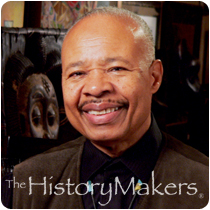 Favorite Color:
Orange
Favorite Food:
Chicken
Favorite Time of Year:
Summer
Favorite Vacation Spot:
Nassau, Bahamas
Favorite Quote:
I Am The Master Of My Fate. I Am The Captain Of My Soul.

Favorite Color:
Orange
Favorite Food:
Chicken
Favorite Time of Year:
Summer
Favorite Vacation Spot:
Nassau, Bahamas
Favorite Quote:
I Am The Master Of My Fate. I Am The Captain Of My Soul.

Art curator, collector, professor and author, Daniel Texidor Parker was born on January 6, 1941 in Chicago, Illinois and grew up in the Bronzeville neighborhood of Chicago during the post-World War II period. His mother, Annie Lee Parker, sparked Parker’s interest in art by taking him to thrift shops, where she would purchase and restore various heirlooms. Parker attended DuSable High School. There, he took classes with Margaret Burroughs. A co-founder of the DuSable Museum of African American History, Burroughs was Parker’s high school art teacher. He credits her for demonstrating how African art is an extension of African culture, and African peoples across the Diaspora. Parker received his B.A. degree in education from what is now Chicago State University in 1964. He later received his M.A. degree in psychology from Roosevelt University in 1967.

Prior to becoming known for his collection and knowledge of African art, Parker worked as a counselor and educator in both the Chicago Public School and Chicago City College systems for 35 years. In 1989, Parker received a Distinguished Professor award from the board of the Chicago City College system for his work at Olive-Harvey College. Parker was also an advocate for African American teachers, professors and professionals in both systems. He retired from Olive-Harvey College in 2000.

Throughout his life, Parker maintained his passion for African art, collecting a priceless treasure of works, both from abroad and locally. Among the artists featured in his more than 400 piece collection include African American artists Debra Hand, Dale Washington, Andre Guichard, Makeba Kedem-DuBose and Anna T. Brown, and pieces hailing from Ghana, Sierra Leone, Guinea and Senegal. In 2003, Parker co-founded Diasporal Rhythms, a consortium of Chicago area art collectors dedicated toward the promotion of contemporary artists, notably from Chicago’s South Side. In 2004, Parker offered a more in-depth look into his own collection and the broader legacy and history of black art, with the publication of his book, African Art: The Diaspora and Beyond. Parker and his longtime partner, Chicago artist Mark Livingston, also began to open Parker’s Hyde Park home to visitors interested in viewing the collection. Parker’s collection has also been shown at Chicago area art museums, and he has become a well-sought expert on African and African American art, recently helping Chicago Bear Charles Tillman develop his own budding collection. Mark Livingston died in 2007.

Parker was interviewed by The HistoryMakers on December 16, 2009.

See how Daniel Texidor Parker is related to other HistoryMakers
Donate Now
Click Here To Explore The Archive Today!