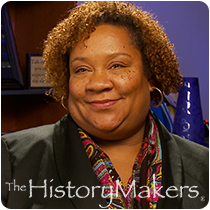 See how Dana Canedy is related to other HistoryMakers

Writer and journalist Dana Canedy was born and raised near Fort Knox, Kentucky. Although she was the daughter of a military family, Canedy knew from a young age that she wanted to be a writer. After being the first in her family to graduate from high school, Canedy went on to receive her B.A. degree in journalism from the University of Kentucky. While at the University of Kentucky, she volunteered for internships and phoned publications in order to see if she could work for free. In her junior year of college, Canedy received an internship from the Wall Street Journal.

Upon graduation, Canedy was hired as a police beat reporter at the West Palm Beach Post, where she worked for one year. Not happy with her position, she left the West Palm Beach Post and went to work for the Cleveland Plain Dealer, where she was a reporter from 1988 until 1996. Then, in 1996, Canedy was hired as a reporter for the New York Times, where she covered stories ranging from race relations to spending time with a murderer in order to learn how and why he killed. Canedy also worked as a national correspondent and as bureau chief for Florida. In 2001, she was part of the team that won a Pulitzer Prize for national reporting for "How Race Is Lived in America," a series on race relations in the United States. In 2006, Canedy was promoted to senior editor at the New York Times in charge of newsroom recruiting and hiring, newsroom staff training, and career development.

Canedy authored the New York Times best-selling memoir A Journal for Jordan: A Story of Love and Honor, which was published in 2008. It tells the story of Canedy's fiancé, First Sergeant Charles Monroe King, who died as the result of the detonation of an improvised explosive device (I.E.D.) during the war in Iraq. Canady now lives with her son Jordan in New York City.

Dana Canedy was interviewed by The HistoryMakers on November 12, 2013.

See how Dana Canedy is related to other HistoryMakers
Click Here To Explore The Archive Today!