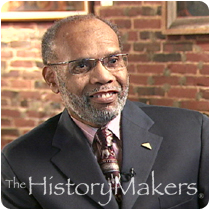 See how Dan Moore, Sr. is related to other HistoryMakers
Donate Now

Noted filmmaker and museum founder Dan A. Moore, Sr. was born in Philadelphia, Pennsylvania, on November 20, 1935. After high school, Moore worked in several jobs, but found his true calling in 1967 when he began producing films.

His first film was a documentary entitled On Patrol for God, filmed at a Christian rally he helped to organize. A few years later, Moore went to Liberia on Africa's west coast and made the film Welcome Home, which was sponsored by the Liberian government on the condition that he return and make a second film, which he did. He would return to Africa and travel to several other countries, as well. He later made films featuring Bill Cosby and Gale Sayers, among others. Moore also produced, wrote, and directed The Journey, Sweet Auburn Street of Pride, and A New Time for a New Voice.

See how Dan Moore, Sr. is related to other HistoryMakers
Donate Now
Click Here To Explore The Archive Today!