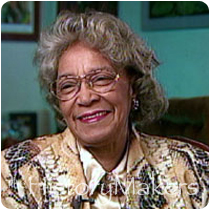 See how Dale Clinton is related to other HistoryMakers
Donate Now

In 1959 Clinton moved to California. By the mid 1960s, she was a struggling single mother of five children living on a monthly $333 welfare check. However, local Head Start officials urged her involvement in the Neighborhood Adult Participation Program. When Los Angeles Mayor Sam Yorty called for the eradication of federal welfare programs, Clinton wrote a letter to President Lyndon Johnson defending the plight of poor mothers. The letter was soon published in the major dailies nationwide and featured in Parade. Congressman Augustus F. Hawkins read the letter into the Congressional Record. The letter impressed Sargent Shriver and trickled down to local human services officials. Soon, Clinton was sought for her advice and was appointed to the board of the local Community Action Agency. She accepted an offer for postgraduate training in community relations and eventually worked on the executive staff of the Office of Community and Human Relations for the city of Long Beach.

Clinton is the recipient of numerous awards and plaques for championing welfare rights, fair housing and economic development. Now retired, she still lives in Long Beach where she is helping to raise her grandchildren.

See how Dale Clinton is related to other HistoryMakers
Donate Now
Click Here To Explore The Archive Today!