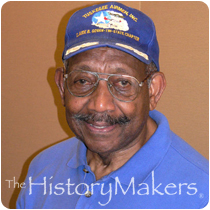 Favorite Color:
Red
Favorite Food:
Sweet Potatoes, Greens (Collard)
Favorite Vacation Spot:
Los Angeles, California
Favorite Quote:
If You Have A Problem, Look At Your Feet. You May Be Standing On The Solution.

Favorite Color:
Red
Favorite Food:
Sweet Potatoes, Greens (Collard)
Favorite Vacation Spot:
Los Angeles, California
Favorite Quote:
If You Have A Problem, Look At Your Feet. You May Be Standing On The Solution.

See how Dabney N. Montgomery is related to other HistoryMakers

Tuskegee Airman Dabney N. Montgomery was born on April 18, 1923 in Selma, Alabama to Lula Anderson Montgomery and Dred Montgomery. He attended the Alabama Lutheran Academy and then Selma University High School, graduating in 1941. After high school, he joined the U.S. Army and was sent for basic training at Keesler Field in Biloxi, Mississippi. After that, Montgomery was sent to Quartermaster Training School at Camp Lee, Virginia (outside of Petersburg), where he received special training in supplies.

In 1943, Montgomery of the 1051st Quartermaster Company of the 96th Air Service Group, attached to the 332nd Air Fighter Group was deployed to Italy. He served there until the end of World War II. In 1946, after returning to the United States, Montgomery entered Livingstone College in Salisbury, North Carolina. Montgomery became a member of Alpha Phi Alpha Fraternity and graduated with his B.A. degree in religious education in 1949. Between 1949 and 1950, he returned to Livingstone College and acquired thirty hours in economic study. He briefly studied economics at the University of Michigan and Wayne State University before going to Boston, Massachusetts, where he enrolled at the Boston Conservatory of Music, studying dance. Montgomery later studied dance with the New York City Metropolitan Opera Dance School before an injury forced him to end his career. In 1955, he began working for the city, first as a Social Service Investigator in the Department of Social Services and later for the Housing Authority. He retired in 1988.

Montgomery passed away on September 3, 2016.

Montgomery was heavily involved in the Civil Rights Movement. He participated in marches in New York City and in the 1963 March on Washington. In 1965, Montgomery was one of Dr. Martin Luther King, Jr.’s bodyguards on the historic Selma to Montgomery march.

Since his retirement, Montgomery has worked as a Social Outreach Worker for Project FIND, a non-profit organization assisting older adults on Manhattan’s West Side. Montgomery is also very active with Harlem’s Mother African Methodist Episcopal Zion Church, which is the oldest organized black church in New York, founded in 1796. Montgomery is also active on the Parks Committee and Harlem’s Interfaith Committee of the Tenth Community Board of Manhattan.

Montgomery has been married to his wife, Amelia Montgomery, for thirty-seven years (as of 2007). They have no children.

Montgomery was interviewed by The HistoryMakers on August 7, 2007.

Montgomery passed away on September 3, 2016.

See how Dabney N. Montgomery is related to other HistoryMakers
Click Here To Explore The Archive Today!