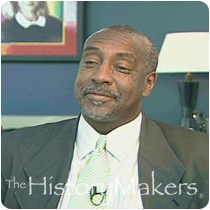 See how Curtis Symonds is related to other HistoryMakers

Corporate executive Curtis Symonds was born on August 12, 1955 in Bermuda to Barbara and Norman Symonds. His family moved to Wilberforce, Ohio when he was two years old. Symonds attended the local Xenia High School, graduating in 1973, and he went on to receive his B.S. degree from Central State University in 1978.

Upon graduation from college, Symonds began working for Continental Cablevision in Ohio in 1979 as system manager. In 1983, he moved to Chicago, Illinois to work for ESPN as a local advertising sales consultant. He was later promoted to Director of Affiliate Marketing for the Midwest region. Symonds remained at ESPN for five years before joining Black Entertainment Television (BET) in 1988 as Executive Vice President of Affiliate Sales and Affiliate Marketing. In 1992, Symonds became President and Chief Operating Officer of BET Action Pay-Per-View and BET International. Symonds served as Executive Vice President of BET on Jazz in 1996 and remained in that position until his retirement in 2001. During his tenure, he helped BET build its subscriber base from 18.8 million to 65 million homes.

Symonds has also served as the President of the T. Howard Foundation, a non-profit organization devoted to promoting women and people of color in entertainment and multimedia platforms. He is a recipient of the 1998 National Cable Television Association (NCTA) Vanguard Award for marketing excellence, the highest award for marketing in the cable industry.

Symonds resides in McLean, Virginia with his wife, Pat, and their three children.

Symonds was interviewed by The HistoryMakers on April 23, 2007.

See how Curtis Symonds is related to other HistoryMakers
Click Here To Explore The Archive Today!