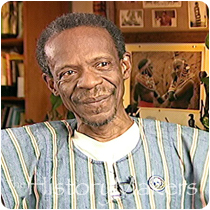 Author and jewelry maker Curtis “Kojo” Morrow was born March 27, 1933 in Chicago, Illinois. He attended elementary school at Doolittle, Douglas and Phillips. When his family moved to Michigan, Morrow, on his seventeenth birthday asked for his mother’s consent to drop out of Buchanan High School and to join the U.S. Army. While training at Fort Belvoir, Virginia, Morrow learned of the escalating conflict in Korea and volunteered for service.

Morrow was sent to Korea and was assigned to the Army’s last all-black unit, the 24th Regiment Combat Team, known as the Buffalo Soldiers. Wounded twice, Morrow received the Purple Heart, the Bronze Star for heroism, the Combat Infantry Badge and four Battle Stars. After Korea, he spent two years as a paratrooper in Japan, before being honorably discharged in 1954. At Chicago's American Academy of Art, from 1957 to 1959, Guy Nalls mentored Morrow in painting. Moving to New York in the early 1960s, Morrow was part a group of black artists and intellectuals who became disillusioned with America and drawn to Africa. In 1965 he left for Ghana with less than $300 in his pocket.

An admirer of Ghana President Kwame Nkrumah, Morrow was welcomed at the airport by Nkrumah's advisor, Dr. Shirley Graham DuBois. Morrow spent the next eleven years living in Ghana, Togo and the Ivory Coast, learning traditional woodcarving and jewelry craftsmanship and fully immersing himself in the culture. Morrow was adopted by an Ashanti-Paramount chief in Ghana and given the name “Kojo Acheampong.” In Ghana during the 1960s and 1970s, the African American expatriates included artists Tom Feelings, Julian Mayfield, Maya Angelou, historian Nell I. Painter, and Alice Windom. In 1983, this group, "Sankofa", held a reunion in Washington, D.C. When he returned to the United States in 1976, Morrow was able to contribute to the growing interests in African art and culture.

In addition to his art and jewelry, Morrow has published The Return of the African-American, detailing his journey of self-discovery to Africa. His second book, What’s a Commie Ever Done to Black People?, details his experiences in Korea and explores what it is like to fight as a United States soldier for other people's "freedom" while suffering from racial discrimination in that same army. More recently, Morrow has been working on an illustrated children’s book based on African mythology.

See how Curtis "Kojo" Morrow is related to other HistoryMakers
Donate Now
Click Here To Explore The Archive Today!