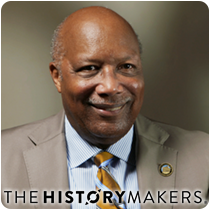 See how Craig Welburn is related to other HistoryMakers

From 1972 to 1983, Welburn worked in middle management at the New Jersey Bell Telephone Company. While there, Welburn began a four year part-time training program with the McDonald’s Corporation in 1979 that would prepare him to purchase and run his own McDonald’s franchise. He and his wife, Diane Welburn, purchased his first McDonald’s location in the West Kensington neighborhood of North Philadelphia in 1983. That same year, Welburn and his wife founded their own company, Welburn Management. Through Welburn Management, the couple would acquire eight restaurants in Philadelphia, New Jersey, and Delaware. They expanded into the Maryland, Washington, D.C., and Northern Virginia areas in 2001, adding another twenty five restaurants. In 1999, Welburn was named chairman and CEO of the National Black McDonald’s Operators Association. During his tenure, Welburn helped to increase the number of African American owned restaurants in the McDonald’s system by forty percent.

Welburn served on the board of directors of the Phil Ad Mac organization; as chairman of the McDonald’s African American Consumer Market Advertising Committee; and as a member of the McDonald’s Operators National Advertising Committee. He was also a member of the McDonald’s National Leadership Council and served on the Library of Congress’ James Madison Council. In 2002, Welburn established the Craig Welburn Endowed Scholarship Fund his alma mater, Cheyney University, to improve support of financial need for students. He has also received many awards and honors for his work. In 2013, Welburn and his wife were honored with the People Leadership Award by the Baltimore Washington Region ROA and he was inducted into the Boule in 2015.

Welburn and his wife, Diane E. Welburn, have four children.

Craig Welburn was interviewed by The HistoryMakers on August 19, 2018.

See how Craig Welburn is related to other HistoryMakers