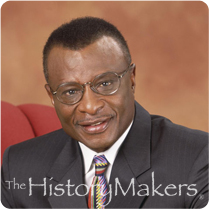 See how Cornell McBride, Sr. is related to other HistoryMakers
Donate Now

Cornell McBride, Sr., a pioneer in the black hair care industry, was born on August 14, 1943 in Savannah, Georgia. He is founder, president and CEO of McBride Research Laboratories, Inc. (MRL), which manufactures and distributes hair care products to international markets. McBride was raised in the poor community surrounding a sugar refinery in Savannah where his father worked. After graduating from high school in 1961, he migrated north and worked briefly for a pharmaceutical company. McBride married his high school sweetheart and joined the U.S. Air Force in 1962 and served until 1967. That same year McBride, his wife Harriet and their baby daughter moved back to Georgia. He attended Fort Valley University for three years then transferred to Mercer University in Macon where he earned a B.S. degree from the School of Pharmacy in 1973.

While at Mercer, he and his fellow classmate Therman McKenzie established M&M Products Company, developing a formula that eventually became Sta-Sof-Fro, the first product to actually soften natural black hair. By the mid-1980s, M&M Products had four national brands: Sta-Sof-Fro, Sof-N-Free, Moxie and Curly Perm. The company’s annual revenues exceeded $40 million making it one of the top Black hair care companies in the world. In 1989, after a series of business troubles, McBride and his partner sold M&M Products to Johnson Products.

McBride bounced back from financial decline in 1990 when he established McBride Research Laboratories, headquartered in Decatur, Georgia. McBride has used his talents as a registered pharmacist to develop lines of innovative products called Wave by Design and Design Essentials. His distribution network includes the utilization of product distributors as independent entrepreneurs to take the products directly to beauty salons in the United States, the Caribbean and the United Kingdom

McBride also masterminded the 24-hour beauty salon for athletes during the 1996 Olympics in Atlanta. He was a founder of the American Health and Beauty Aids Institute (AHBAI) in 1982 and served as chairman of the organization from 1984 to 1986. He is a member of the Atlanta Business League, International Business Club, the National Association of Chain Drug Stores, and the Society of Cosmetic Chemists. McBride recently authored A Cut Above: How Cornell McBride Made Millions in the Hair Care Biz. The book offers readers a road map for building wealth and stresses the importance of determination, family values, perseverance, goal setting and “giving back” as key components of one’s life.

McBride and his family live in Decatur, Georgia

See how Cornell McBride, Sr. is related to other HistoryMakers
Donate Now
Click Here To Explore The Archive Today!