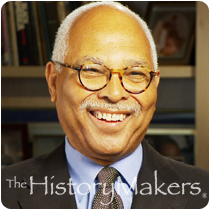 See how Cornell Leverette Moore is related to other HistoryMakers

Lawyer and bank executive Cornell Leverette Moore was born on September 18, 1939 in Tignall, Georgia to Jesse L. and Luetta T. Moore. Moore was raised in Statesboro, Georgia and graduated from William James High School in 1957. He received his A.B. degree from Virginia Union University in 1961 and his J.D. degree from Howard University School of Law in 1964. During law school, Moore worked as a staff attorney for the United States Department of Treasury.

After receiving his law degree, Moore worked as a trust administrator for Crocker National Bank. In 1966, Moore became a regional counsel for the Comptroller of Currency, U.S. Treasury Department. He then rejoined the commercial banking world as the assistant vice president and legal officer for the Northwestern National Bank of Minneapolis from 1968 to 1970. Moore continued to work in banking as the executive vice president and director of Shelter Mortgage from 1970 to 1973, a director of Shelard National Bank from 1973 to 1978 and the president of Hennepin County Bar Foundation from 1975 to 1978. He served as president and CEO of Lease More Equipment from 1977 to 1986, director of Golden Valley Bank from 1978 to 2002; and became senior vice president and general counsel of Miller & Schroeder Financial Inc. in 1986. Also in 1986, Moore became part owner of the professional baseball team, the Minnesota Twins. In 1995, he joined the law firm of Dorsey and Whitney, LLP where he has represented major energy and natural resource companies. In 2004, Moore was elected Grand Sire Archon of the Grand Boulé of the Sigma Pi Phi Fraternity, the first African American Greek-lettered organization.

Moore has served on the boards of many organizations and universities including William Mitchell College of Law, Howard University, Virginia Union University, Minneapolis Public Housing Authority, Twin Cities Diversity in Practice, the Boy Scouts of America, Johnson C. Smith University and Dunwoody College of Technology. He is the recipient of many awards such as the Legacy Award from the Pan African Community Endowment, the Kappa Alpha Psi Distinguished Citizen Award, the Child of America Award and the Whitney M. Young Service Award from the Boy Scouts of America. Cornell Leverette Moore is married to Wenda Weekes Moore and has three children, Lynne, Jonathon and Meredith.

Cornell Leverette Moore was interviewed by The HistoryMakers on January 15, 2012.

See how Cornell Leverette Moore is related to other HistoryMakers
Click Here To Explore The Archive Today!