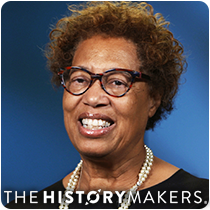 See how Constance W. Rice is related to other HistoryMakers
Donate Now

Nonprofit executive and academic administrator Constance W. Rice was born in Brooklyn, New York. She attended P.S. 144 and Erasmus Hall High School in New York City and enrolled at Howard University. She transferred to Queens College, and received her B.S. degree in sociology and anthropology in 1966. Rice received her M.A. degree in public administration and her Ph.D. in higher education administration from the University of Washington.

In 1966, Rice began working under Whitney Young at the National Urban League. The following year, she moved to Seattle, Washington and began working at the Washington Employment Security Department as a youth counselor. She later accepted an editorial position at The Trumpet, a newsletter focused on housing and social services and operated by the Central Area Motivation Program. In 1984, Rice founded CWR, Inc., a public relations firm. She also served as assistant executive director of the Washington Education Association and later led the Center for Urban Studies at Western Washington State University. In 1992, Rice became vice chancellor of the Institutional Advancement for Seattle Community College District. She then became interim president of North Seattle Community College in 1995, before she returned to the Seattle Community College District as senior vice chancellor in 1997. Rice also helped establish the National Coalition of 101 Black Women, which focused on networking and employment opportunities. During her husband’s tenure as mayor of Seattle, Rice created the Health and Nutrition Project at Washington State University.

Rice was appointed as a trustee of Evergreen State College in 1989. In 1999, she became president and founder of Strategic Education Centers, to support the educational evolution of children in Africa and the United States, which also helped establish two after-school centers in Swaziland. She continued this work as the founder and executive director of the Desmond Tutu Peace Foundation USA, which established two schools in Swaziland. In 2013, she was appointed by Washington Governor Jay Islee to the University of Washington’s Board of Regents, and the following year, she became a senior executive fellow for Casey Family Programs.

Rice has held leadership positions on numerous boards, including the Seattle Community College District, Seattle Art Museum Executive Board Community and Education Engagement Committee. Rice was the chair of Women and Ethnic Studies at Shoreline Community College and served as a gubernatorial appointee to the Washington Student Achievement Council and as vice chair. Rice served on the University of Washington Visiting Committee for the Evans School of Public Policy & Governance.  She was the national western area vice director of The Links, Incorporated, and served on the Board of Directors Downtown Rotary, the Rainier Club, The Seattle Foundation, and Swedish Hospital.

In 2018, Rice received the Women of Influence Lifetime Achievement Award from the Puget Sound Business Journal.

Rice and her husband Norman B. Rice, have one child, Mian Rice.

Constance W. Rice was interviewed by The HistoryMakers on October 8, 2017.

See how Constance W. Rice is related to other HistoryMakers
Donate Now
Click Here To Explore The Archive Today!