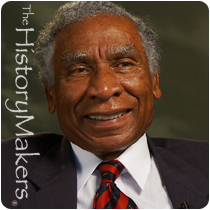 See how Conrad Williams is related to other HistoryMakers
Donate Now

Physicist and physics professor Conrad Williams was born on March 1, 1936 in Warsaw, North Carolina. Williams grew up on Capitol Hill in Washington, D.C. and as a seven year. Williams had a strong interest in science, and his mentor, a geology curator for the Museum of Natural History, taught him about rocks and rock formations. Williams graduated from Spingarn Senior High School in 1954 and then earned his B.S. degree from Morgan State University in 1958. In 1960, Williams joined the U.S. Naval Research Laboratory (NRL) as a solid state physicist. He continued to work at the Naval Research Laboratory while earning his M.S. degree in physics from Howard University. He also received his Ph.D. degree in physics from Howard University in 1971 under the guidance of Dr. Arthur N. Thorpe and Dr. Albert I. Schindler (NRL).

Williams worked at the U.S. Naval Research Laboratory for thirty one years. In 1980, he resigned and joined the National Science Foundation as program director of the college and university faculty programs; and, in 1981, became the associate program director for condensed matter physics and superconductivity. In 1983, he returned to NRL and retired in 1993 as the head of the Applied Magnetics Section. In 1993, Williams joined the faculty of Morgan State University as a physics professor. During his tenure, he made significant contributions to the development of the research infrastructure, particularly in the area of condensed mater physics.

Williams made significant contributions to the field of magnetism and magnetic materials for over five decades. His research interests centered on the physical properties of magnetism in unique compounds, such as magnetic anisotropy, magnetostriction and magnetization. Williams designed and constructed the world’s first low temperature 6-Tesla high field torque magnetometer that was instrumental in developing the theory and experimental verification of the magnetic properties of novel rare earth intermetallic compounds. Many of these materials are utilized in parts of the U.S. Navy’s fleet as well as other applications.

Williams has received several awards, including the Naval Research Laboratory’s prestigious Sigma Xi Award for Pure Science in 1977 for his research in establishing origin of the magnetic anisotropy energy of rare earth laves phase compounds. He was named a “Giant in Science,” by the Quality Education for Minorities in Mathematics, Science and Engineering Network. Williams is also a fellow of the American Physical Society and the National Society of Black Physicists. Williams has been a distinguished invited professor and/or scientist at many institutions that include: the Indian Institute of Technology, Howard University, the Tokyo Institute of Technology and Johns Hopkins University. He has served on many national and international committees which include the Department of Energy Basic Energy Sciences Advisory Committee, appointed by the Secretary of Energy; the National Science Foundation's Materials Research Advisory Committee; the U.S. National Commission for the United Nations Educational, Scientific, and Cultural Organization (UNESCO), appointed by the Secretary of State; and the NSF Advisory Panel on Scientific Opportunities in High Magnetic Field Research, which served as the basis for the National High Field Magnetic Laboratory in Tallahassee, Flordia.

Conrad Williams was interviewed by The History makers on July 17, 2012.

See how Conrad Williams is related to other HistoryMakers
Donate Now
Click Here To Explore The Archive Today!