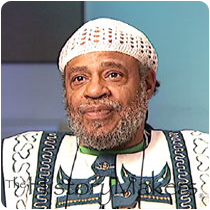 Conrad Walter Worrill was born on August 15, 1941, in Pasadena, California. His mother, Anna Bell, was the first African American to sing in the Pasadena Philharmonic Orchestra and his father, Walter, was a college-educated YMCA manager. Conrad Worrill became an activist and scholar whose goal is to advance the cause and concept of African independence and self-determination both in the United States and internationally.

After moving to Chicago on his ninth birthday, Worrill became serious about athletics. He gained his first racial consciousness through competitive swimming when his black YMCA team faced serious heckling. In 1962, he was drafted into the Army and shipped to Okinawa, Japan. While overseas, he read profusely about African American history, culture and politics. After he returned to Chicago in 1963, Worrill attended George Williams College but became radicalized by the Black Power movement. After graduating in 1968, a West Side YMCA hired him as the program director. He earned his Ph.D. from the University of Wisconsin-Madison. He headed George Williams College's Urban Institute in 1973 and began teaching at Northeastern Illinois University in Chicago in 1976, where he is the coordinator and professor of Inner City Studies Education. While organizing in 1983 to elect Chicago's first black mayor, Harold Washington, Worrill co-founded the Task Force for Black Political Empowerment. As the national chairman of the National Black United Front (NBUF), Worrill is working aggressively to change the American public school curriculum to be inclusive of the contributions of Africans and African Americans.

Worrill is the elected economic development commissioner of the National Coalition of Blacks for Reparations in America (N'COBRA). He served as special consultant of field operations for the historic Million Man March/ Day of Absence on October 16, 1995, in Washington, D.C. As part of the fight to win reparations for the American descendants of slaves, he traveled to Geneva, Switzerland, in 1997 with a delegation to formally charge the U.S. Government with genocide and human right violations before the Commission on Human Rights. The delegation presented the commission with a "Declaration of Genocide by the United States Government Against the Black Population in the United States" with 157,000 signatures.

Upon returning to the United States, Worrill presented this petition to the United Nations in New York City. In 2001, he led a 400-member delegation to the UN World Conference Against Racism in Durban, South Africa. He writes the syndicated weekly column "Worrill's World," which is widely read in African American newspapers across the country. In August 2002, Worrill organized a national reparations rally attended by thousands.