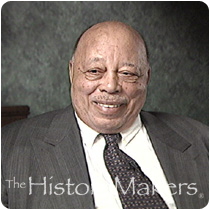 Founder of Pro-Line and philanthropist Comer Joseph Cottrell was born December 7, 1931 in Mobile, Alabama. His parents, Comer J., Sr. and Helen Smith Cottrell were black Catholics. As a youngster, Cottrell and his brother, Jimmy, turned a pair of bunnies into a business, including selling their progeny as Easter bunnies, meat and fur. Cottrell attended Heart of Mary Elementary and Secondary Schools. At age seventeen, Cottrell joined the United States Air Force where he attained the rank of First Sergeant and managed an Air Force PX in Okinawa. Cottrell attended the University of Detroit before leaving the service in 1954. He joined Sears Roebuck in 1964 and rose to the position of division manager in Los Angeles, California.

In 1968, with an initial investment of $600.00, Cottrell and a friend got into the black hair care business. Then, with his brother, Jimmy, Cottrell manufactured strawberry scented oil sheen for Afro hairstyles and founded Pro-Line Corporation in 1970. By 1973, he made his first million dollars in sales. In 1979, Cottrell took the $200.00 “Jerry Curl” out of the beauty shop and into black homes with his $8.00 Pro-Line “Curly Kit”, which increased his sales from one million dollars a year to ten million dollars in the first six months. Shortly thereafter Cottrell moved Pro-Line to Dallas, Texas. At the top of the ethnic hair care business, Cottrell became a part owner, with George W. Bush of the Texas Rangers professional baseball team in 1989; turning a $3 million dollar profit on a $500,000.00 investment. He also founded FCC Investment Corporation.

In 1990, he purchased and restored the 131-acre, HBCU, Bishop College campus for $1.5 million and transferred it to A.M.E. Paul Quinn College. Cottrell is a trustee of Northwood University and a member of the Dallas Chamber of Commerce, the North Texas Commission, and the Dallas Citizens Council. He was the former chairman of the Texas Cosmetology Commission and vice chair of the Texas Youth Commission. He was a board member or officer of NAACP, National Urban League, YMCA, Dallas Family Hospital, Better Business Bureau, Compton College Foundation, Paul Quinn College and Baylor University Foundation. Cottrell was former vice chair of the Dallas Black Chamber of Commerce. Recipient of scores of awards, Cottrell hosted a yearly “Taste of Cottrell” event in Dallas.

See how Comer Joseph Cottrell is related to other HistoryMakers
Donate Now
Click Here To Explore The Archive Today!