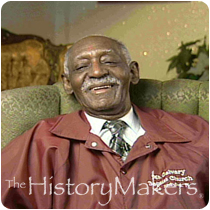 See how Colonel Stone Johnson is related to other HistoryMakers

Colonel Stone Johnson was born on September 9, 1918, in Hayneville, Alabama, to Fannie and Colonel Johnson. Johnson’s family moved to Birmingham, Alabama, when he was a small child; there he attended Slater School, and graduated from Lincoln School in 1939. While in high school, Johnson began working on the weekends for the Bowden trucking company; after graduation, he continued there full-time. Johnson was then hired to work at the L & M Rail Road Company, where he became the first African American union representative; in this role he worked to equalize working conditions for African American employees, who were often discriminated against. Johnson remained employed by the L & M Rail Road Company for thirty-nine years.

In 1956, Johnson met Reverend Fred L. Shuttlesworth and became active in the Civil Rights Movement after civil rights leaders formed the Alabama Christian Movement for Human Rights (ACMHR) in response to Alabama state officials outlawing the NAACP for its supportive role in the Montgomery Bus Boycott.

After the bombing of Bethel Baptist Church and the parsonage where Shuttlesworth resided on Christmas Eve in 1958, Johnson became a part of a security detail for the ACMHR and worked to protect black leaders, their homes, and churches from Ku Klux Klan attacks. On one occasion, Johnson and an associate were instrumental in removing ignited dynamite from the Bethel Baptist Church, preventing further destruction and possible loss of life. In 1977, Johnson and one other witness testified against J.B Stoner, chairman of the National States Rights Party, the political arm of the Ku Klux Klan; Stoner was found guilty of conspiring to bomb the Bethel Baptist Church in 1955.

Johnson remained in Birmingham with Beatrice, his wife of over sixty-five years.

See how Colonel Stone Johnson is related to other HistoryMakers
Click Here To Explore The Archive Today!