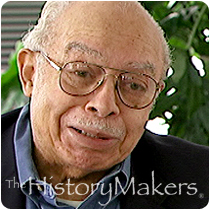 See how Col. William R. Thompson is related to other HistoryMakers

Born on January 26, 1916, Lieutenant Colonel William R. Thompson was born in the Wiley Avenue section of Pittsburgh, Pennsylvania, the son of a prosperous caterer. His mother died when he was fourteen days old.

Thompson received his B.S. in business administration from Hampton University in Virginia. During his senior year, he became a licensed pilot and entered the service in 1940 as one of the first African American aviation cadets admitted to the U.S. Army Air Corps. These cadets were later known as members of the 99th Squadron of the Tuskegee Airmen. As part of the 99th Squadron, Thompson served as an armament officer under the guidance of Benjamin Davis. He also served as unofficial photographer for the 99th Squadron and parts of his collection now reside in the National Air and Space Museum in Washington, D.C.

After Thompson returned from the war he moved to Chicago and worked for Johnson Publication in the promotions department. Thompson passed away on Saturday, April 15, 2006 at the age of 90.

See how Col. William R. Thompson is related to other HistoryMakers
Click Here To Explore The Archive Today!