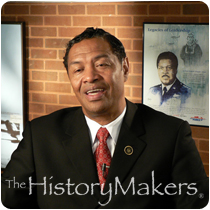 See how Col. Roosevelt J. Lewis is related to other HistoryMakers
Donate Now

Colonel and federal government appointee Roosevelt Joseph Lewis, Jr. was born on August 25, 1943, in Greenville, Alabama to Clara Nell Mitchell Lewis and Roosevelt Joseph Lewis, Sr. Lewis and his family moved to Toulminville, Alabama when he was four years old; and he graduated as valedictorian from Heart of Mary High School in 1960. In 1964, Lewis received his B.S. degree in chemistry from Tuskegee University (formerly the Tuskegee Institute) in Tuskegee, Alabama. He earned his M.A. degree in transportation and business management from the University of Alabama in Tuscalossa, Alabama.

While attending Tuskegee University, Lewis enrolled in the United States Air Force Reserve Officer Training Corps and met aviation pioneer Alfred “Chief” Anderson, who was the chief flight instructor and mentor to the Tuskegee Airmen of World War II. By 1968, Lewis gained recognition for his superior performance in the ROTC and was elected "Best Major in Command" by his unit in 1968, 1969, 1982 and 1988.

Lewis served the United States government's Department of Defense in five Pentagon positions, including the Office of the Secretary of Defense. As the chief of Vehicle Programs, he purchased the $3.4 billion vehicle fleet for the U.S. Air Force and managed a $34.8 billion budget as Executive Officer of the Logistics Engineering branch, Headquarters U.S. Air Force.

Lewis was a presidential scholar at the University of Alabama and served as a congressional intern with the Public Works & Transportation Committee for the U.S. House of Representatives. Lewis has also taught transportation courses for Embry-Riddle Aeronautical University and the University of Maryland. In addition, he was previously former secretary of the Alabama Aeronautics Commission.

Since his retirement in 1991, Lewis has focused his efforts on aviation training for new pilots and has guided over 300 of them in obtaining their licenses. Lewis also serves as chairman and CEO of Air Tuskegee Ltd. and Global One Jets. He also owns historic Moton Field, where most of the Tuskegee Airmen, including his mentor, “Chief” Anderson, learned how to fly.
Roosevelt Joseph Lewis Jr., was interviewed by The HistoryMakers on September 6, 2007.

See how Col. Roosevelt J. Lewis is related to other HistoryMakers
Donate Now
Click Here To Explore The Archive Today!