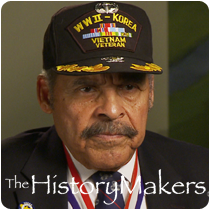 Favorite Color:
Blue
Favorite Food:
Pudding (Bread)
Favorite Time of Year:
Christmas
Favorite Vacation Spot:
Honolulu, Hawaii
Favorite Quote:
Do something good every day for somebody other than yourself. and AIRBORNE!

Favorite Color:
Blue
Favorite Food:
Pudding (Bread)
Favorite Time of Year:
Christmas
Favorite Vacation Spot:
Honolulu, Hawaii
Favorite Quote:
Do something good every day for somebody other than yourself. and AIRBORNE!

See how Col. Porcher Taylor, Jr. is related to other HistoryMakers

Retired colonel and education administrator Porcher L. Taylor was born on August 9, 1925 in Jacksonville, Florida to Porcher L., Sr. and Mary Bell Taylor. Taylor’s father was the founder, publisher, and editor of the Florida Tattler. The weekly newspaper ran from 1934 until his death in 1964. Taylor was hired by his father to work in the family business, Taylor and Son Printing Company, Inc. Taylor worked as a typesetter and a pressman until 1943, when he joined the U.S. Navy and spent three years on tour in the Pacific Theater during World War II. Honorably discharged from the U.S. Armed Forces, he was able to enroll at Tuskegee Institute with support from the Army’s G.I. Bill.

In 1946, Taylor enlisted in the Tuskegee Institute Reserve Officer Training Corps – the precursor to the famed Tuskegee Airmen – and completed his training in 1949. Taylor also played varsity football for three years as first-string fullback and was selected as one of Tuskegee Institute’s All-Time Greatest Football Athletes in 1985. With the outbreak of the Korean War, Taylor was deployed to the Pacific Theater, where he served with the 82nd Airborne Division. In 1971, Taylor became the first African American promoted to full colonel at Fort Jackson, South Carolina. Taylor is one of few living Americans who served the United States in three major wars – World War II, Koran War and Vietnam War – in both the U.S. Navy and Army. He served in the Navy for three years and the Army for twenty-five years.

In 1961, Taylor received his M.S. degree in counseling from Virginia State University (VSU), where he also served as president for student affairs and as director of counseling. He also served as professor of military science and tactics at VSU. He was then selected to enter a doctoral program at the University of South Carolina in 1968; and, in 1972 he became one of the first two African Americans to earn a Ph.D. degree in psychology from the University of South Carolina.

Taylor has been recognized for his many contributions. His military awards include the Legion of Merit, Bronze Star, Meritorious Service Medal and Army Commendation Medal. He was also the recipient of the Distinguished Eagle Scout Award, an honor shared by former U.S. President Gerald Ford and astronaut Neil Armstrong. Taylor lives with his wife Ann in Petersburg, Virginia.

Porcher L. Taylor was interviewed by The HistoryMakers on September 12, 2012.

See how Col. Porcher Taylor, Jr. is related to other HistoryMakers
Click Here To Explore The Archive Today!