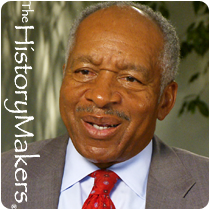 Favorite Color:
Brown
Favorite Food:
Dessert
Favorite Time of Year:
Spring
Favorite Vacation Spot:
Florida, the Beaches, Mountains in the Summer
Favorite Quote:
Make the best of today because today is all you have.

Favorite Color:
Brown
Favorite Food:
Dessert
Favorite Time of Year:
Spring
Favorite Vacation Spot:
Florida, the Beaches, Mountains in the Summer
Favorite Quote:
Make the best of today because today is all you have.

See how Col. Norman McDaniel is related to other HistoryMakers

Retired United States Air Force Colonel Norman A. McDaniel was born on July 27, 1937 in Fayetteville, North Carolina. The son of sharecroppers Fannie Marie and Clyde Oliver McDaniel, he graduated as the valedictorian of the Armstrong High School Class of 1955. He attended North Carolina A&T State University, participated in the AFROTC program, and was commissioned a Second Lieutenant in the U. S. Air Force (AF) upon receiving his B.S. degree in Mechanical Engineering in June, 1959.

After entering AF Active Duty, McDaniel completed a series of military trainings. From 1961 to 1964, he served in the 23rd Bomb Squadron at Travis AFB, California, and then, was assigned as a Sub-Systems Program Manager on the F-111 Aircraft Development Program at Wright-Patterson AFB, Ohio. In 1966, McDaniel was assigned to Takhli Air Base (AB) in Thailand, where he flew combat missions over North Vietnam. On July, 20, 1966, McDaniel and four of his five crew members became prisoners of war (POWs) when their plane was shot down. While a POW, he was promoted to the rank of Major and was awarded the AF Silver Star for valor and leadership in the POW camps. As one of over 700 American POWs held by North Vietnam, McDaniel was released on February 12, 1973, as part of Operation Homecoming. After returning from Vietnam, he completed the Armed Forces Staff College in Norfolk, Virginia and graduate school at the Florida Institute of Technology (earning his M.S. degree in systems management). Between 1975 and 1987, McDaniel completed tours of duty as a System Program Staff officer at AF Systems Command, Andrews AFB, Maryland. He also served as Division Chief for Congressional Activities and Acquisition Policy at Headquarters USAF, the Pentagon; commander of AFROTC at Howard University in Washington, DC; commander of the Air Force Survival Training Wing in Spokane, Washington; and as Assistant Deputy to the Deputy Undersecretary of Defense (AD,DUSD) for International Programs and Foreign Disclosure Policy, the Pentagon. During that period, McDaniel also completed the Naval War College, Senior Program at Newport, Rhode Island. After retiring from active duty in 1988, he worked in the defense industry. From 1991 to 2006, McDaniel was a Faculty Member, Department Head, and Associate Dean at the Defense Acquisition University in Ft. Belvoir, Virginia. He currently works for himself as a motivational speaker, and part-time, as a Facilitator of the Transition Assistance Program (TAP) helping men and women separating or retiring from U.S. military services to succeed in their transition from military to civilian life.

On September 18, 1998, McDaniel served as the keynote speaker at the Pentagon's celebration of National POW/MIA Recognition Day in honor of all of the former POWs, unaccounted for service members and civilians, and their families. McDaniel's military honors, include the Silver Star for Valor, three Legions of Merit, Bronze Star with "V" Valor Device, three Distinguished Flying Crosses (the POW medal), the Purple Heart and the Vietnam Service Medal with fourteen bronze stars. McDaniel is married to Jean Carol (Breeze) McDaniel. They have two children, Christopher and Crystal, and four grandchildren

Norman A. McDaniel was interviewed by The HistoryMakers on March 8, 2012.

See how Col. Norman McDaniel is related to other HistoryMakers
Click Here To Explore The Archive Today!