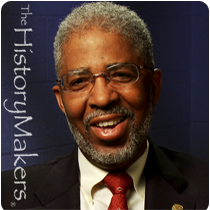 See how Col. James Stith is related to other HistoryMakers

Physicist and Retired U.S. Army Colonel James Stith was born on July 17, 1941, to Ruth Stith in Brunswick County, Virginia. Stith had three step-sisters—Wilma, Aldrena, and Joyce—and one half-sister, Juanita. Stith attended Oak Grove Elementary School and he graduated from James Solomon Russell High School in 1959. It was in high school that Stith decided he wanted to pursue a career in physics.

Stith went on to graduate from Virginia State College to earn his B.S. and M.S. degrees, both in physics, in the years 1963 and 1965, respectively. During his time at Virginia State College, Stith joined the Alpha Phi Alpha Fraternity, and worked as an instructor. In 1965, he was called to active duty in the U.S. Army for two years. Then, after a two-year term working with the Radio Corporation of America, Stith continued his education at Pennsylvania State University, where he earned his D.Ed. degree in physics in 1972. Following his graduation, Stith was recalled to active duty, and so he joined the faculty at the United States Military Academy at West Point. In 1976, Stith became the first tenured African American professor at the United States Military Academy, where he continued to work until he retired from his post in 1993. Stith retired from the United States Military Academy as a full professor of physics and from the military at the grade of Colonel. Stith then worked as a full professor of physics at Ohio State University until 1998. Following his time at Ohio State University, Stith was hired as the vice president of the Physics Resource Center of the American Institute of Physics, a position he would hold for ten years. Stith also served on the board of the Triangle Coalition from 1999 to 2006, and he joined the advisory board for Project Kaleidoscope in 1990. Additionally, Stith has served on several advisory committees of the National Research Council throughout his career.

Stith has played an important role in increasing the role of African Americans in the physical sciences and has been recognized by the Academy for his work. In 1990, he was elected Vice President of the American Association of Physics Teachers, and in 2004 he was recognized as one of the “50 Most Important Blacks in Research Science.”

Stith is married to Alberta Hill, and they have three adult daughters: Adrienne Yvette, Andrea Lynn, and Alyssa Joy.

James Stith was interviewed by The HistoryMakers on July 14, 2010.

See how Col. James Stith is related to other HistoryMakers
Click Here To Explore The Archive Today!