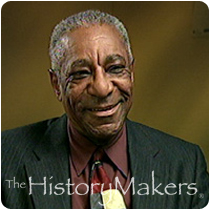 See how Col. Eugene Scott is related to other HistoryMakers
Donate Now

A dynamic leader and manager, Colonel Eugene Frederick Scott was born October 14, 1939 in Miami, Florida. Raised in Chicago, he attended A.D. Sexton Elementary School and Englewood High School where he was a sharpshooter in the ROTC. Scott graduated from Booker T. Washington High School in Miami, Florida in 1957. He continued in ROTC at Florida A&M University where he graduated with a B.A. in political science in 1961. Scott entered the United States Army as a Second Lieutenant in 1962.

In Germany, he commanded tank forces and was the principal staff officer for Training and Operations for the 8th Infantry Division Combat Ready Forces. Scott was responsible for the training of 27,000 soldiers. He served two tours of duty in Vietnam from 1965 to 1966 and from 1969 to 1971. Scott completed his twenty-eight year military career as a Post Commander for two major U.S. Army installations with budgets in excess of $200 million. Scott, a favorite of General Norman Swartzkopf, retired just prior to the Gulf War in 1990.

After retirement Scott joined Sengstacke Enterprises as executive assistant to John H.H. Sengstacke. Scott managed the company’s five newspapers and for more than ten years, he served as general manager and publisher of the Chicago Daily Defender. In this capacity and in retirement, Scott has served on a number of boards and committees including: Bronzeville Military Academy; the Illinois Military Flags Commission; the Governor’s Commission on Discrimination and Hate Crimes; the Attorney General’s African American Advisory Committee; the National Advisory Committee of the Institute of Government and Public Affairs at the University of Illinois; the Chicago Area Boy Scouts; and as Chairman of the National African American Military Museum.

See how Col. Eugene Scott is related to other HistoryMakers
Donate Now
Click Here To Explore The Archive Today!