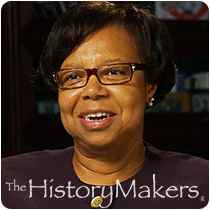 Favorite Color:
All Colors
Favorite Food:
Sweet Potatoes
Favorite Time of Year:
Fall
Favorite Vacation Spot:
Hawaii
Favorite Quote:
I can do all things through Christ that strengthens me.

Favorite Color:
All Colors
Favorite Food:
Sweet Potatoes
Favorite Time of Year:
Fall
Favorite Vacation Spot:
Hawaii
Favorite Quote:
I can do all things through Christ that strengthens me.

See how Col. Christine Knighton is related to other HistoryMakers
Donate Now

Upon graduation from college, Knighton was commissioned a second lieutenant and served briefly in the Quartermaster Corps and the Transportation Officer’s Corps. In 1980, she became the second African American woman in the U.S. Department of Defense and the first woman from the State of Georgia to complete aviation training. Knighton then reported to the U.S. Army V Corps in West Germany where her assignments included that of flight section leader of the 205th Transportation Battalion; platoon leader of the 62nd Aviation Company; and logistics officer of the 11th Aviation Battalion. In 1988, she assumed command of Delta Company, the 227th Aviation Regiment – 1st Cavalry’s Combat Aviation Company, and then served a tour of duty at Camp Stanley in Uijeongbu, South Korea with the 2nd Infantry Division as the Aviation Brigade logistics officer.

Knighton reported to Fort Leavenworth, Kansas in 1990 and was assigned as an aviation logistician for the Combat Structure for the Army Study Group. She then was deployed to Operation Desert Storm with the Center for Army Lessons Learned (CALL) to assess aviation units positioned in Saudi, Kuwait and Iraq. In 1993, Knighton was appointed as commander of Hotel Company in the 159th Aviation Regiment (AVIM) and deployed to Mogadishu, Somalia in support of the United Nations “Operation Continue Hope.” Knighton became the first woman in the U.S. Army to command a tactical combat arms battalion on November 3, 1996 when she was assigned as commander of a Blackhawk Helicopter Battalion in the 1st Cavalry Division and deployed to Tulza, Bosnia-Herzegovina to conduct aviation operations.

Knighton is a member of Delta Sigma Theta Sorority, Inc., the Tuskegee Airmen Association, and served as vice president of the Bessie Coleman Foundation. Knighton was nationally recognized by Glamour Magazinein 1989 as one of its “Top 10 Outstanding Working Women in the United States” and appeared on the cover of USA Today. In 1999, Knighton’s Blackhawk Helicopter Battalion was named U.S. Army Aviation Unit of the Year. Her military decorations include the Defense Superior Service Medal, the Legion of Merit, the Meritorious Service Medal, the Army Achievement Medal, the National Defense Service Medal, the Armed Forces Expeditionary Medal, the Southwest Asia Service Medal, the NATO Medal, the Kuwait Liberation Medal, and the Army’s Senior Aviator Badge. Knighton is also authorized to wear the Office of the Secretary of Defense Staff Badge, and received the Order of Saint Michael which recognized outstanding contributions to U.S. Army Aviation.

U.S. Army Colonel Christine B. Knighton was interviewed by The HistoryMakers in July 26, 2013.

See how Col. Christine Knighton is related to other HistoryMakers
Donate Now
Click Here To Explore The Archive Today!