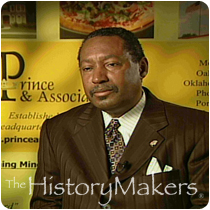 See how Clovis Prince is related to other HistoryMakers

President and Chief Executive Officer (CEO) of Prince & Associates, Clovis Lionel Prince was born on July 22, 1950 in Guthrie, Oklahoma to Daisy Mae and A.C. Prince. Prince was raised in Oklahoma City, Oklahoma where he attended North East High School. In 1968, Prince graduated and went on to attend the University of Oklahoma where he earned his B.A. degree in 1971.

After graduating from college, Prince was hired by General Motors as a manager and worked in that capacity until 1985. In 1986, he founded Prince & Associates and began providing real estate development services for residential and commercial properties. In addition, Prince’s services also included the provision of legal assistance to the public and private sector.

Upon entering the communications industry, Prince has helped to manage the likes of some of the world’s first cellular networks including Cellular One. Since its inception, Prince & Associates has managed properties in Oklahoma, Florida and Texas, and in 1991, the company expanded throughout the United States and overseas. In 1997, Prince was responsible for the first ever monopoly agreement between Omnipoint Communications and the Florida Department of Transportation, Turnpike District.

Then, in 2000, Prince & Associates helped Nextel Communications to handle traffic in downtown New Orleans during the CTIA Convention. Later in 2003, Prince became instrumental in the launching of several U.S. Cellular projects across various states including Oklahoma and Kansas. In 2005, Prince continued providing telecommunication services in the Midwest by assisting with the design, optimization and operations of the wireless telecommunications system in Iowa and other Midwestern cities. In 2007, Prince & Associates began its new venture: Prince & Associates Restaurants, which include Prince Bistro and Papa John’s Pizza franchises.

Prince was interviewed by the The HistoryMakers on March 13, 2008.

See how Clovis Prince is related to other HistoryMakers
Click Here To Explore The Archive Today!