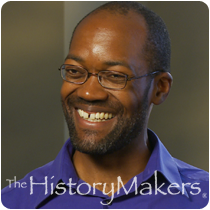 See how Clifford Johnson is related to other HistoryMakers
Donate Now

Physicist and physics professor Clifford Johnson was born in 1968 in London, England. Growing up, Johnson spent ten years on the Caribbean island of Montserrat, where his father worked as a telephone engineer. As a child, Johnson began to teach himself electronics by secretly reading his father's books. In lieu of watching television, Johnson read electronics books and magazines, fixed appliances, and designed devices and machines such as radios and remote-controlled submarines. He also enjoyed gardening and making intricate patterned designs using needlework techniques such as crochet and macramé. Due to his interest in how things worked, Johnson decided at an early age he wanted to become a scientist. He went on to receive his B.S. degree in physics from the Imperial College at London University in 1989 and his Ph.D. degree in physics from Southampton University in 1992.

After graduating, Johnson began working as a postdoctoral fellow at the Institute for Advanced Study in Princeton, New Jersey, and in 1994, he moved to Princeton University as an instructor and post doctoral fellow. The following year, he became a postdoctoral fellow at the Kavli Institute for Theoretical Physics in Santa Barbara, California. Johnson taught as an assistant professor at the University of Kentucky between 1997 and 1999 before joining the faculty at the University of Durham, England. Since 2003, Johnson has been a professor at the University of Southern California’s Department of Physics and Astronomy. In 2004, Johnson founded the African Summer Theory Institute, which held its inaugural workshop meeting in Cape Town, South Africa.

Johnson received the National Science Foundation’s (NSF) Career Award in 1997, and in 2005, he was awarded the Institute of Physics’ Maxwell Medal and Prize for his work on string theory and quantum gravity. He has also been listed in the Journal of Blacks in Higher Education as the most highly cited black professor of mathematics or a related field at an American university or college. In addition to his research and teaching, Johnson communicates and explains science to the general public. He blogs, has made short films on science, written articles for magazines, has co-authored a play, authored a book, and is currently writing and drawing a graphic novel featuring science. He appears on the History Channel’s The Universe series and other series on channels such as Discovery, Science, National Geographic, Spike, and Comedy Central. He has been a science consultant for film, TV, radio, and theater.

Johnson was interviewed by The HistoryMakers on April 26, 2011.

See how Clifford Johnson is related to other HistoryMakers
Donate Now
Click Here To Explore The Archive Today!