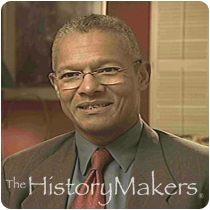 See how Cleveland Christophe is related to other HistoryMakers
Donate Now

Venture capitalist and accomplished businessman Cleveland A. Christophe was born on January 1, 1946 in Savannah, Georgia. The son of a college professor and public school teacher, Christophe grew up in Pine Bluff, Arkansas. Christophe was studious growing up and received a National Science Foundation summer grant to study at Howard University after his junior year in high school. He went on to attend and graduate from Howard University in 1966 with his B.S. degree in business administration. He subsequently obtained his M.B.A. from the University of Michigan Business School in 1967. He was the only Black among the School’s 800 M.B.A. students.

Christophe began his career with First National City Bank (now Citicorp) in the firm’s prestigious Investment Research Department. Less than two years later, at the age of 22, he became one of First National City Bank’s (FNCB) youngest officers ever. Christophe left FNCB in 1969 to join Kenton Corporation, a retail conglomerate. There, he worked for the company’s chairman and gained his initial experience in acquiring businesses. In 1970, Christophe became chairman and CEO of his own restaurant called Soul Stop located in New York’s Harlem. He and his partners had plans to open multiple restaurant units and expand by franchising. A year later, Christophe decided the restaurant business was not his forte. He and his attorney, Reginald F. Lewis, succeeded in selling Soul Stop to another restaurant chain.

Christophe returned to FNCB in January of 1971, this time as an officer in FNCB Capital Corporation, the Bank’s venture capital subsidiary. In 1974, Christophe was promoted to Vice President of FNCB, having rejoined the Investment Research Department. In 1975, he told the head of FNCB’s International Bank that he wanted to obtain experience in commercial banking including operations, treasury, and credit -- preferably abroad so as to concomitantly gain cross cultural experience. Later that year, he moved to FNCB’s office in Paris, France, where he worked for four years. He was the Bank’s Country Operations Head for France for the latter two years. In 1980, Christophe relocated to FNCB’s (now Citibank) San Francisco office, where he became a credit officer and head of corporate banking for the high technology industries, notably Silicon Valley. In 1983, Christophe again moved abroad, this time to Kingston, Jamaica, as Citibank’s Country Head in charge of all the Bank’s business in Jamaica. In 1985, having succeeded in restructuring Citibank’s Jamaican business during the height of the third world debt crisis, he was awarded a larger and more complex assignment as Country Head for Colombia located in Bogota.

Christophe left TLC in 1988 to pursue a vision of building his own company. In 1990, he joined Equico Capital Corp. the venture capital subsidiary of Equitable Life Assurance Company. On May 14, 1992, a day Christophe calls Emancipation Day, Christophe and his partners Duane E. Hill, Lawrence C. Morse and Divakar R. Kamath acquired control of Equico and changed the name to TSG Ventures, Inc. A Specialized Small Business Investment Company licensed by the US Small Business Administration, TSG Ventures was among the largest and most successful firms investing in minority controlled businesses. In 1994, Christophe and Hill organized TSG Capital Group and raised a $225 million buyout fund. A subsequent $515 million fund was raised in 1998. TSG Capital Group’s investment strategy focused on underserved ethnic markets (African Americans and Hispanics) and the company's access to ethnic entrepreneurs and managers who represent a largely untapped base of talent. By February of 1999, TSG Capital could invest up to $100 million of equity in single deals with all decision making coming from inside the firm. TSG had become one of the largest minority-run firms in the United States.

Christophe was interviewed by The HistoryMakers on November 20, 2006.

See how Cleveland Christophe is related to other HistoryMakers
Donate Now
Click Here To Explore The Archive Today!