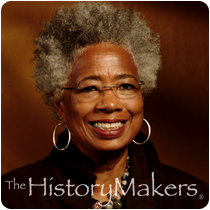 See how Cleo F. Wilson is related to other HistoryMakers
Donate Now

Nonprofit administrator and foundation executive Cleo Wilson was born in 1943, and spent her early years in the Chicago housing project of Altgeld Gardens. After spending two years at Robert Crane High School, Wilson graduated from the Frances Parker High School in 1961. Later that year, Wilson enrolled at Chicago State Teacher’s College, now Chicago State University. In her sophomore year, however, she left school to protest school segregation in Chicago’s Englewood community and later, the Vietnam War. After leaving the activist movement to support her children, Wilson worked as a keypunch operator until deciding to return to school in 1973. She received her B.A. degree in English from Chicago State in 1976.

In 1976, Wilson was hired as an accounting clerk for Playboy. She eventually worked her way up to supervisor of Accounts Payable. In 1982, she joined the Playboy Foundation, the philanthropic arm of Hugh Hefner’s empire. After just two years, she was appointed Executive Director of the foundation. As its head, she included employees in the process, asking for their opinion on grant decisions. Wilson also engaged the Foundation in the process of “microphilanthropy,”—giving smaller amounts of money to more organizations—including many grassroots efforts in Chicago. Wilson also continued to fight for civil liberties and racial equality, filing a lawsuit against the City of Chicago and State of Illinois to ensure fair voting protection for Chicago’s African American residents and serving as vice president of the Illinois Chapter of the American Civil Liberties Union. She was also an early HIV/AIDS activist, beginning in the 1980s, when HIV/AIDS was still very poorly comprehended and stigmatized by the general public. She was appointed to the Chicago AIDS Foundation’s Board of Directors in 1989, and starting in the next year served as president of that organization for three years.

In 2002, Wilson became president of The Center for Intuitive and Outsider Art, a Chicago nonprofit organization dedicated to highlighting self-taught and outsider art, and in 2007, she became executive director of the center. She left Playboy after 25 years of service in 2005, but has continued to tour on the lecture circuit and is a board member or advisor for many civic organizations.

Cleo Wilson was interviewed by The HistoryMakers on September 25, 2010.

See how Cleo F. Wilson is related to other HistoryMakers
Donate Now
Click Here To Explore The Archive Today!