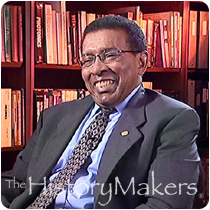 "I believe that there are greater things in life than life itself. I believe in climbing upward even when the spent and broken thing called my body calls halt."

Electrical engineer and physicist Clayton W. Bates, Jr. was born on September 5, 1932 in New York City, where he attended elementary school at New York Public School 119 and middle school at New York Junior High School 43. Bates earned his high school diploma from the all-boys Brooklyn Technical High School in 1950 where he was a member of the baseball, basketball, and track teams. As a young boy, he also enjoyed playing baseball and basketball in his Harlem neighborhood where he lived with his mother and older sister, Barbara. Bates' parents, Arline and Clayton Bates, Sr., divorced when he was a young teenager. Bates' love affair with science and engineering began early; as a youngster he enjoyed building model planes and dreamed of becoming a pilot.

Following graduation, Bates worked for several engineering and scientific companies including Varian Associates, AVCO, Sylvania Electric Products, the Ford Instrument Company, and RCA. His projects ranged from low-level light detection and x-ray image intensification to the design of the nuclear reactor controls of the first SEA WOLF, the second atomic powered submarine. In 1972, Bates left Varian and accepted a position in Stanford University’s Department of Materials Science and Engineering. Bates continued to work at Stanford for the next twenty-two years where he helped to organize the Society of Black Scientists and Engineers. In 1984, Bates accepted the position of associate dean for graduate education and research in Howard University’s College of Engineering, Architecture, and Computer Sciences. Throughout his career, Bates authored numerous publications. He has been committed to increasing the number of African Americans in STEM fields and improving scientific research at Historically Black Colleges and Universities.

Clayton W. Bates, Jr. was interviewed by The HistoryMakers on March 5, 2005.