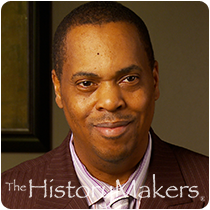 See how Clayton Banks is related to other HistoryMakers

Media executive Clayton Banks attended California State University at Fullerton from 1980 to 1985, and graduated with his B.A. degree in speech communications and business administration. In 2000, with a scholarship from the National Cable & Telecommunication Association (NCTA) & the National Association for Multi-Ethnicity In Communications (NAMIC), Banks completed the Executive Management Program at Harvard Business School.

From 1994 to 1997, Banks served as the senior vice president of sales and marketing for Sega Channel. In 1997, he joined Comedy Central as the vice president of affiliate relations. While at Comedy Central, he was part of the launch of “South Park,” “The Daily Show with Jon Stewart,” and “The Upright Citizens Brigade.” In 1998, Banks became the regional director at Showtime Networks, and later in that year he founded Ember Media Corporation, where he has produced multimedia and broadband content for Discovery Networks, HBO, Pepsi Corp., Bloomberg TV and Showtime Networks. Between 2011 and 2013, Banks developed the “More Than A Mapp” mobile application and website that features over three-hundred African American landmarks and points of interests. He has implemented multi-platform strategies for the Essence Music Festival, MTV, ESPN, New York Institute of Technology and other top brands.

Banks was elected president of NAMIC from 1996 to 1998, where he championed programs such as the Patrick Mellon Mentoring Program and the NAMIC Chapter Leadership Forum. Banks served as a member of the board of directors for the Armory Track and Field Foundation, a board member for the Academy of Innovative Technology High School and is an active participant in the “Principal for a Day” program in New York City.

Clayton Banks was interviewed by The HistortyMakers on January 14, 2013.

See how Clayton Banks is related to other HistoryMakers
Click Here To Explore The Archive Today!