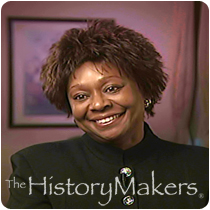 See how Clayola Brown is related to other HistoryMakers
Donate Now

Union and civil rights leader Clayola Brown was born Clayola Beatrice Oliver on August 4, 1948, in Charleston, South Carolina. Of Gullah ancestry, Brown attended school in Key West, Florida and Oxnard, California before graduating from Philadelphia’s Simon Gratz High School in 1966, where she was an athlete and majorette. At age fifteen, Brown joined her mother, Ann Belle Jenkins Shands, in a successful campaign to bring the Textile Workers Union of America (TWUA) to the Manhattan Shirt Factory in Charleston. Brown later attended Florida A&M University, graduating in 1970 with her B.S. degree in secondary education and physical education.

In 1970, Brown was hired by TWUA in their claims department in Opalaca, Alabama. Subsequently, Brown went on to play an organizing role in the seventeen-year struggle to unionize the textile giant, J.P. Stevens, culminating in 1980 with four thousand workers winning a contract through the newly formed Amalgamated Clothing and Textile Workers Union (ACTWU). Brown served as the ACTWU’s education director, civil rights director, and also, for thirteen years, as manager of the ACTWU’s Laundry Division. In 1991, Brown was elected international vice president of the ACTWU; a post which she was continually reelected to for over a decade. In 1994, President Bill Clinton appointed Brown to the National Commission on Employment Policy. In 1995, Brown helped merge the International Ladies Garment Workers Union (ILGWU) with ACTWU to form the Union of Needle Trades, Industrial and Textile Employees (UNITE, now UNITEHERE!). That same year, Brown was elected international vice president of the AFL-CIO. In 2004, Brown became the first woman to serve as national president of the A. Phillip Randolph Institute.

Brown served on the board of Amalgamated Bank, the Congressional Black Caucus Foundation, and SCLC. At the NAACP, Brown served on the Labor Ad Hoc, and NAACP Image Awards Committees. Brown also served on the Executive Committee of the Workers Defense League and as the first vice president of the Coalition of Black Trade Unionists (CBTU). Brown was honored with the NAACP Leadership and Keeper of the Flame Awards, the CBTU Woman of Valor Award, the SCLC Drum Major for Justice Award and many others.

Brown and her husband, Alfred Brown, have a son, Alfred, Jr.

See how Clayola Brown is related to other HistoryMakers
Donate Now
Click Here To Explore The Archive Today!