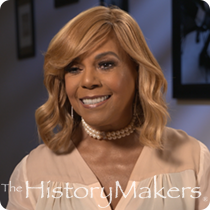 Favorite Color:
Purple
Favorite Food:
All kinds of food
Favorite Time of Year:
Spring
Favorite Vacation Spot:
Any place around the world, I like traveling
Favorite Quote:
Know your worth

Favorite Color:
Purple
Favorite Food:
All kinds of food
Favorite Time of Year:
Spring
Favorite Vacation Spot:
Any place around the world, I like traveling
Favorite Quote:
Know your worth

See how Claudette Robinson is related to other HistoryMakers

Singer and songwriter Claudette Robinson was born on June 20, 1938 in New Orleans, Louisiana and later moved with her family to Detroit, Michigan in 1950. She graduated from Commerce High School in Detroit at the age of fifteen and enrolled at Wayne State University, before joining the U.S. Marine Corps.

In her teen years, she sang in the female group The Matadorettes. While her brother, Sonny Rogers was away serving in the U.S. Army, Claudette met his friend and band mate Smokey Robinson of The Matadors. Robinson joined the group in her brothers’ absence, which was renamed The Miracles. She sang with Ronnie White, Pete Moore, Marv Tarplin, and Smokey Robinson, her husband. Together, the group created the first hit single for Motown Records, “Shop Around,” which sold millions of copies. The Miracles would later be known for a variety of songs, including “You've Really Got a Hold on Me,” “Mickey's Monkey,” “I Second That Emotion,” “Baby Baby Don't Cry,” and “The Tears of a Clown.” The song “The Tears of a Clown” was the group’s most popular single, selling over three million copies all over the world. Although Robinson left the group in 1964, she continued to singe back-up vocals for the group until 1972. That year, her husband, Smokey Robinson, left The Miracles to pursue his solo career. Robinson eventually rejoined The Miracles and performed with the group until 2013, when her cousin, Bobby Rogers, passed away.

After leaving The Miracles, Robinson became active in numerous community organizations, including the HAL Awards and the Rhythm and Blues Foundation, which was dedicated to the preservation of R&B music. Robinson has been nationally recognized for her contributions to R&B music through her work with The Miracles. In 2009, she received a star on the Hollywood Walk of Fame. Robinson was also inducted into the Rock and Roll Hall of Fame in 2012, along with the rest of the members of The Miracles. As the only woman in the first band signed to Motown Records, she is often referred to as the first lady of Motown by its founder, Berry Gordy.

Claudette Robinson was interviewed by The HistoryMakers on July 22, 2017.

See how Claudette Robinson is related to other HistoryMakers