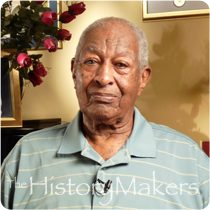 While attending the University of Colorado, Walton was only one of six minority students on campus and his treatment was not always pleasant. Walton supported himself in school by working various jobs including as a hasher in the dining room at the Chi Psi fraternity house. He also found work sewing and stuffing mats for the track team, spreading sawdust in jumping pits and watering the football fields. At night, Walton played the piano in house bands at Denver and Boulder clubs. He played in the orchestra at the Airport Ballroom and for the dances of the sororities and fraternities. Unfortunately, Walton broke his ankle right before the qualifying meets for the 1936 Olympics so he could not compete in the Olympics in Germany with Jesse Owens. Nevertheless, he was named All-American after coming in second place in a 1937 national track meet, making him the first All-American athlete at The University of Colorado. Walton set the school record in the discus throw with a mark of 141-feet, 2 ½ inches. This effort earned him the Rocky Mountain Athletic Conference title. During his athletic career, Walton would best this mark several times. A discus throw of 157 feet at Colorado School of Mines in 1935 earned him national attention because it was the second best throw in the country at the time. Walton dominated the Rocky Mountain Athletic Conference and was a two-time champion. The track star left school for a steady job with the Chicago Park District (where he reached the position of associate superintendent) with just one English literature class remaining, making him ineligible for his B.A. degree and a place in the school’s Hall of Fame. Seventy-five years after Walton attended The University of Colorado, alumni and faculty members mounted a successful campaign to get him an honorary degree and entry into the university’s Hall of Fame in 2008. At ninety-four years old, he is the oldest Hall of Fame inductee.

Walton worked for the Chicago Park District for forty-eight years, eventually becoming a trustee for the department. He resides in Lombard, Illinois.