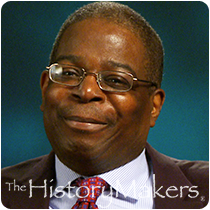 See how Clarence Waldron is related to other HistoryMakers
Donate Now

Journalist Clarence Waldron was born in 1957 in Union Township, New Jersey. In 1973, Waldron received a full scholarship from A Better Chance to attend a college preparatory boarding school, Darrow School in New Lebanon, New York. In 1979, he graduated from the Columbia College of Columbia University with his B.A. degree in English Literature. Waldron went on to receive his M.S. degree in journalism from Columbia University’s Graduate School of Journalism in 1980. While attending Columbia’s graduate school, he received a RCA/NBC Fellowship that covered full tuition and fees.

In 1998, Waldron was hired as an adjunct lecturer at Northwestern University’s Medill School of Journalism. He also became an adjunct lecturer at Columbia College Chicago in 2007. In 2012, Waldron founded CW Media, a multi-faceted arts and entertainment company specializing in book projects, consulting, public relations and motivational speaking, where he serves as CEO, writer and editor. Waldron also co-authored and edited "Geoffrey Holder & Carmen DeLavallade: A Memoir in Four Movements - the Exhibition Catalogue," and was the editor for Merri Dee's book Life Lessons On Faith, Forgiveness & Grace.

Waldron has received multiple awards, including a PASS Award from the National Council on Crime Delinquency, a Legacy Award from Elektra/Atlantic Records, the Award of Excellence from Visions Blue Institute in Chicago, and the Golden Quill Award for Feature Writing. In 2010, he received the Legacy Award from the National Association of Black Journalists, and was cited as ‘the dean of arts and entertainment journalists’.

Clarence Waldron was interviewed by The HistoryMakers on January 25, 2014.

See how Clarence Waldron is related to other HistoryMakers
Donate Now
Click Here To Explore The Archive Today!