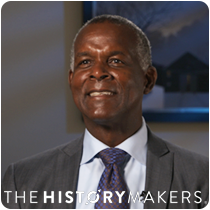 See how Clarence Otis, Jr. is related to other HistoryMakers

Corporate executive Clarence Otis, Jr. was born on April 11, 1956 in Vicksburg, Mississippi to homemaker Calanthus Hall Otis and janitor Clarence Otis, Sr. Relocating to Los Angeles, California at four years old, he attended San Pedro Street Elementary School and, following a move to the city’s Watts neighborhood at age seven, Grape Street Elementary School. From there, he attended Edwin Marham Junior High School and David Starr Jordan High School, where he was the valedictorian of his graduating class in 1973. Otis was then awarded a scholarship to attend Williams College in Williamstown, Massachusetts, where he graduated in 1977 with dual degrees in political science and economics. Otis then enrolled at Stanford University Law School, earning his J.D. degree in 1980.

Otis worked as a corporate law associate for two New York City-based firms, Donovan, Leisure, Newton & Irvine and Gordon, Hurwitz, & Butowsky. In 1984, he entered the finance sector, joining the municipal securities group at Kidder, Peabody & Company. From 1987 to 1990, he served as the vice president of the public finance division at First Boston Corporation. Then, Otis became the founding partner of Siebert Municipal Securities, a division of Muriel Siebert & Company. In 1991, Otis was named the managing director of public finance and head of the unit at Chemical Securities. Four years later, he moved to Orlando, Florida to join Darden Restaurants as senior vice president and treasurer, operating restaurant chains including Red Lobster, Olive Garden, and Smokey Bones BBQ. Otis oversaw the financing activities of the company’s 1,200 restaurant locations nationwide. He was promoted to chief financial officer in 1998, and then president of Smokey Bones BBQ in 2002. During his two year tenure there, he increased the number of restaurants from thirty to eighty. In 2004, Otis was named chief executive officer of Darden Restaurants, and became chairman of its board of directors in 2005. In this role, Otis acquired popular chains like LongHorn Steakhouse and Capital Grille, before retiring as CEO of Darden Restaurants in 2014, after ten years in the position.

Otis served on several boards including Williams College board of trustees, The Travelers Companies, Verizon Communications and Boys & Girls Clubs of America board of governors.

Otis and his wife, Jacqueline Bradley Otis, reside in Florida, where they own one of the largest privately held African American art collections in the United States.

Clarence Otis, Jr. was interviewed by The HistoryMakers on August 17, 2018.

See how Clarence Otis, Jr. is related to other HistoryMakers