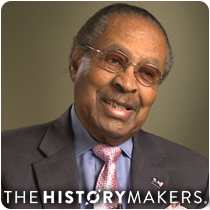 "The first one hundred years are the hardest, after that it's a piece of cake."

Legal advisor and civil rights leader Clarence B. Jones was born on January 8, 1931 in Philadelphia, Pennsylvania. His parents, Mary and Goldshore Jones, were live-in domestic household servants. He was raised in foster homes and in a Catholic boarding school in Eastern Pennsylvania, run by the Sisters of The Blessed Sacrament. Jones graduated from Palmyra High School in Palmyra, New Jersey in 1949, and enrolled in Columbia University. He was drafted into the U.S. Army during the Korean War in 1953, but was discharged as a “national security risk” due to his left-wing political activities as a college student and his refusal to sign a loyalty oath at the time of his induction. After receiving his B.A. degree from Columbia in 1956, he attended Boston University School of Law, obtaining his LL.B. degree in 1959.

In 1960, Jones moved to Altadena, California to pursue an entertainment and intellectual property law practice. The following year, he joined the defense team for Reverend Dr. Martin Luther King, Jr., who was charged with tax fraud by the State of Alabama. After King’s acquittal, Jones moved to Harlem, New York to work with the Southern Christian Leadership Conference (SCLC). He then became a partner at the firm of Lubell, Lubell, and Jones. In 1962, Jones was selected to serve as general counsel for the Gandhi Society for Human Rights, the SCLC’s fundraising arm. He joined King’s inner circle, the “research committee,” helping draft the civil rights leader’s speeches. He disseminated King’s “Letter from Birmingham Jail” (1963), contributed to the “I Have a Dream” (1963) and “Beyond Vietnam” (1967) speeches, and represented the SCLC in the landmark libel case New York Times v. Sullivan (1964). Jones copyrighted the “I Have a Dream” speech in 1963. In 1967, Jones joined the investment banking and brokerage firm of Carter, Berlind & Weill and became the first African American allied member of the New York Stock Exchange. In 1971, at the request of then New York Governor Nelson Rockefeller, he served as a negotiator during the Attica Prison riot, as well as the editor, publisher, and part owner of the New York Amsterdam News. During his career, he provided financial consulting services to the governments of the Bahamas, the Dominican Republic, Jamaica, and Zambia, as well as to private investors through Marks Paneth & Shron LLP. He served as a senior partner at Clemenson Capital Company, specializing in cross-border finance in Korea; and President & CEO of CBJ Multimedia Associates, Inc., specializing in telecommunications.

Jones was named Fortune Magazine’s “Man of the Month” twice. He received numerous awards for his service and appeared on CNN, the O’Reilly Factor, NPR, and other media outlets. He was named a Scholar in Residence at Stanford University’s Martin Luther King, Jr. Research and Education Institute, during which time he wrote and published two books about his experiences with Dr. Martin Luther King, Jr.

Clarence B. Jones was interviewed by The HistoryMakers on December 10, 2015.