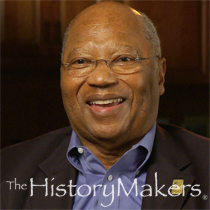 See how Claibourne Smith is related to other HistoryMakers

Chemist Claibourne D. Smith was born on January 6, 1938 in Memphis, Tennessee to Lessie Minor and James Smith, Jr. At Melrose High School, he decided that he wanted to become a chemist. Smith petitioned the Memphis School Board to bring higher-level trigonometry and math courses to his school. He graduated from the University of Denver with his B.S. and M.S. degrees in chemistry in 1959 and 1961, respectively. During college, Smith worked in chemical synthesis at the Denver Research Institute. He then went on to earn his Ph.D. degree in organic chemistry from the University of Oregon in 1964.

Throughout his career, Smith has served as a member of numerous organizations and advisory boards. After serving as the board chairman of Delaware State University, he was named the acting president of Delaware State University from 2008 to 2010. Smith was appointed to the Delaware State Board of Education in 1993, and reappointed in 1999. He also served on the Leadership and Assistance for Science Education Reform Advisory Board, the Delaware Council on Crime and Justice and on the board of directors of the Fair Housing Council of Delaware. For his service to public education, Smith was given the Distinguished Service Award by the National Association of State Boards of Education in 2006. He was also the recipient of the Dean’s Alumni Achievement Award from the University of Oregon in 1989 and the Jefferson Awards Certificate of Excellence from the The News Journal of Delaware in 1994.

Smith lives with his wife, Roseann in Greenville, Delaware.

Claibourne D. Smith was interviewed by The HistoryMakers on May 25, 2012.

See how Claibourne Smith is related to other HistoryMakers
Click Here To Explore The Archive Today!