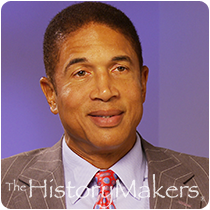 See how Christopher Williams is related to other HistoryMakers

Investment banker Christopher J. Williams was born in 1958 in New Milford, Connecticut. Williams attended Howard University and graduated with his B.A. degree in 1979. He then enrolled in Dartmouth College and went on to receive his M.B.A. degree in finance from the Amos Tuck School of Business in 1981.

Williams began his investment banking career with Lehman Brothers in New York City where he rose to the level of senior vice president before leaving the firm in 1992. While there, he was responsible for several areas, including debt capital markets as well as trading derivatives and fixed income securities. Following Lehman Brothers, Williams formed Williams Financial Markets, a division of Jeffries & Company, Inc., which specialized in structuring debt financings for investment grade corporate borrowers. In 1994, Williams and his wife, Janice Savin Williams, founded the Williams Capital Group, L.P. and Williams Capital Management, LLC; and, in 2002, he became the founder, chairman, and chief executive officer. He has directed Williams Capital’s strategic effort in investment banking and its expansion into asset management. Williams also served as a trustee of Williams Capital Management Trust management.

Williams has served on the board of directors of Harrah’s Entertainment, Inc., Wal-Mart Stores, Inc., the Partnership for New York City, the Securities Industry Association, and the National Association of Securities Professionals. His memberships include the Economic Club of New York, the Gotham Chapter of the Young President’s Organization and the Century Association. Williams also served as a member of several not-for-profit boards, including the National Dance Institute, WNYC radio, the Mt. Sinai Hospital, the Alvin Ailey American Dance Theater, the Teachers College at Columbia University, the Lincoln Center for the Performing Arts, and the Tuck School of Business at Dartmouth College. Williams Capital is also a supporter of The Fresh Air Fund and Partnership with Children.

In 2002, Williams was selected by Fortune magazine as one of the 50 most powerful African Americans in corporate America. In addition, Williams Capital was ranked as the largest minority-owned investment bank in the June of 2002 issue of Black Enterprise magazine. In 2003, Williams was listed in Crains New York Business magazine as one of the top 100 minority business leaders. He also received the Executive Leadership Council Achievement Award in 2012.

Christopher J. Williams was interviewed by The HistoryMakers on November 11, 2013.

See how Christopher Williams is related to other HistoryMakers