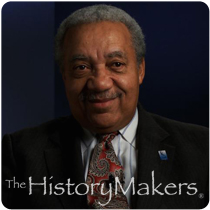 See how Christopher R. Reed is related to other HistoryMakers
Donate Now

Historical scholar, Christopher Robert Reed was born on January 11, 1942 in Chicago, Illinois to Robert and Josephine Reed. Reed’s maternal great grandfather served in the 116th Infantry of the United States Colored Troops during the Civil War and took part in the surrender of Robert E. Lee at Appomattox Court House in 1865. Growing up in East Garfield Park on Chicago’s West Side, Reed attended John Marshall Elementary School and graduated from John Marshall High School in 1959. Starting at Crane Junior College, Reed earned his B.A. and M.A. degrees in history from Roosevelt University in 1963 and 1968 respectively. While attending Roosevelt University, he met future colleagues John Bracey (professor of history at University of Massachusetts) and Juliet E. K. Walker (founder of the Center for Black Business History). The Roosevelt faculty included Charles V. Hamilton, August Meirer, St. Clair Drake and Lorenzo Dow Turner. At Roosevelt, Reed was also a member of the Negro History Club. From 1971 to 1980, he served as assistant professor of history at Northern Illinois University, and from 1980 to 1982, he served as Dean of Arts and Sciences at Malcolm X College (formerly Crane Community College). In 1982, Reed garnered his Ph.D. from Kent State University in Kent, Ohio.

From 1982 to 1987, Reed served as professor of Black Studies at the University of Illinois at Chicago. He returned to Roosevelt University as professor of history in 1987 where he taught courses on North American Slavery, the History of Blacks in Chicago (1770 – 1960) and the History of Blacks in Chicago (1960 to the present). Reed is the author of a few books including The Chicago NAACP and the Rise of Black Professional Leadership, 1910-1966 in 1997; All the World is Here!: The Black Presence at White City, a book about African and African American participation in Chicago’s Columbian Exposition of 1893, in 2000; wrote the introduction for History of the Chicago Urban League (with Arvah E. Strickland) in 2001 and Black Chicago’s First Century, Volume 1, 1833-1900 in 2005. He retired from teaching in 2009.

Reed is often called upon as an expert on Chicago history and the history of black Chicago. He is a member of the East Garfield Park Coalition, the West of Western Housing Alliance, the Martin Luther King, Jr. Boys and Girls Club and was a member of the West Side Coalition for Unity and Political Action supporting the late Harold Washington. In 2001, at Roosevelt, he was the recipient of the St. Clair Drake Award for Outstanding Scholarship. Reed, Chicago’s Black History Forum, keeps his great grandfathers’ Army discharge papers in a bank vault. Reed is married and lives in the Chicago area.

Reed was interviewed by The HistoryMakers on December 17, 2009.

See how Christopher R. Reed is related to other HistoryMakers
Donate Now
Click Here To Explore The Archive Today!