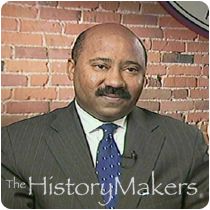 See how Christopher R. Cloud is related to other HistoryMakers

From 1991 to 1992, Cloud worked as an associate for the Council on Foundations. Later, while serving as a legislative aid for Connecticut State Senator Eric D. Coleman, he researched and wrote the legislation that created the first African American Males Taskforce and the Connecticut African American Affairs Commission. In 1997, Cloud was appointed project manager for AMISTAD America in New Haven; there he conceived and designed Freedom Schooner Amistad, a human rights education project which re-creates the Spanish ship made famous by an 1839 slave revolt. Promoted to executive director in 1999, Cloud serves as president and chief executive officer.

Cloud is a fellow of the Terry Sanford Institute of Public Policy at Duke University; the Emerging Leaders Programme in Cape Town, South Africa; the Coro Midwestern Center in St. Louis, Missouri; the Amistad Sierra Leone Friendship Delegation; and the Amistad America/University of Havana Delegation. In 2004, Cloud received a Tourism Ambassador of the Year Award from the Connecticut Commission on Culture and Tourism. A board member of the Connecticut Institute for the Blind; the Bushnell Theatre; American Sail Training Association; and the Greater Hartford Convention and Visitor’s Bureau, Cloud also received the National Maritime Historical Society, American Ship Trust Award in 2002.

See how Christopher R. Cloud is related to other HistoryMakers
Click Here To Explore The Archive Today!