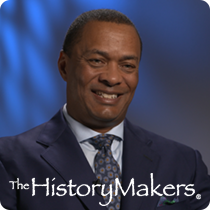 See how Christopher P. Reynolds is related to other HistoryMakers
Donate Now

Lawyer Christopher P. Reynolds was born on January 11, 1963 in Queens, New York to Lee H. Reynolds and Phyllis M. Graham. He graduated from Kalamazoo College in Kalamazoo, Michigan with his B.A. degree in political science in 1983. Reynolds went on to attend Harvard Law School and received his J.D. degree in 1986.

After graduation, Reynolds worked as a law clerk for the United States Court of Appeals Sixth District under Judge Damon J. Keith. In 1987, he relocated to New York City and began working as a litigator for the law firm of Hughes, Hubbard, & Reed, LLP. There, he specialized in liability and class action defense work. Two years later, he became the Assistant United States Attorney for the Southern District of New York in the criminal justice division of the U.S. Attorney’s office, and served in this position for five years. At the end of his term, Reynolds joined the law firm of Morgan, Lewis, & Bockius, LLP as a partner and trial lawyer. In this position, he served as manager of the labor and employment law litigation group, was a member of the firm’s advisory board, and was chair of the firm’s diversity committee. In 2007, Reynolds joined Toyota Motor Sales, U.S.A., Inc. as the vice president of business law within the company’s legal services division. He played an integral role in the Toyota Recall Crisis of 2009. Reynolds was promoted to the position of general counsel and chief legal officer of Toyota Motor North America in 2012. In 2015, he was appointed as the managing officer, general counsel, and chief legal officer of the Toyota Motor Corporation. He is the first African American to hold these global positions for the Toyota Motor Corporation. Reynolds was then named executive vice president, corporate resources and chief diversity officer of Toyota Motor North America in 2017.

In addition to his law practice, Reynolds has been involved with a number of organizations. He has served on the board of trustees for Kalamazoo College, and on the board of directors for The Lawyers’ Committee for Civil Rights Under Law and the Los Angeles Urban League.

Reynolds and his wife, Arlene Ford, have three children.

Christopher P. Reynolds was interviewed by The HistoryMakers on March 23, 2017.

See how Christopher P. Reynolds is related to other HistoryMakers
Donate Now
Click Here To Explore The Archive Today!