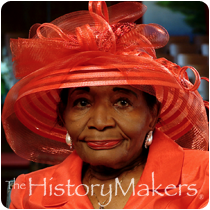 Civil rights activist and education professor Christine King Farris was born in Atlanta, Georgia, on September 11, 1927, to Alberta Christine Williams King and Martin Luther King, Sr. She was the eldest of three children: her younger siblings were Martin Luther King, Jr., and Alfred Daniel (A.D.) Williams King. Farris and her family belonged to Ebenezer Baptist Church, where her father preached. Farris attended Yonge Street Elementary School, famous for its organization of the first black Parent-Teacher Association, before transferring to Oglethorpe Elementary. From 1940 to 1942, she attended Atlanta University’s Laboratory High School, and when it closed, she enrolled at Booker T. Washington High School, which her grandfather helped to found. In 1944, Farris graduated from Washington High School and entered Spelman College, where her grandmother, mother and great-aunt had all matriculated.

In 1948, Farris graduated from Spelman College with her B.A. degree in economics. One year later, she graduated from Columbia University with her M.A. degree in the social foundations of education. Over the next few summers, she earned a second M.A. degree from Columbia University in special education. In 1950, Farris took her first job as a teacher at W.H. Crogman Elementary, where she taught a seventh grade reading class. In 1958, Farris was hired as director of the freshman reading program at Spelman College, and eventually became director of the Learning Resources Center, a position she still holds. She is Spelman's longest-serving faculty member. In 1965, when her brother, Reverend Martin Luther King, Jr., led the campaign to vote in Selma, Alabama, Farris sang at the opening rally on the day they departed for Montgomery. After his death, his wife, Coretta Scott King, founded the Martin Luther King, Jr. Center for Nonviolent Social Change in Atlanta, Georgia. Farris served as the treasurer and taught workshops on nonviolence. Farris also went on to found the Martin Luther King, Jr. Child Development Center.

The recipient of the Fannie Lou Hamer Award, Farris helped establish the Martin Luther King Jr. National Historical Site in 1980, at the suggestion of President Jimmy Carter. She is the author of the acclaimed children's book, My Brother Martin, and of an autobiography, Through It All: Reflections on My Life, My Family, and My Faith. Currently, Farris resides in Atlanta with her husband, Isaac Newton Farris. They have two children, Isaac Newton Farris, Jr., and Angela Christine Farris, and one granddaughter, Farris Christine Watkins.

Christine King Farris was interviewed by The HistoryMakers on July 11, 2010.

See how Christine King Farris is related to other HistoryMakers
Donate Now
Click Here To Explore The Archive Today!