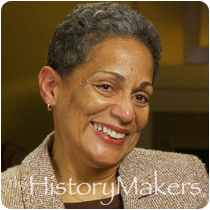 See how Christine James-Brown is related to other HistoryMakers

Non profit executive Christine James-Brown was born in Philadelphia, Pennsylvania on September 9, 1952 to Eva and Howard James. After graduating from Burlington City High School in Burlington, New Jersey, James-Brown enrolled at Rutgers University. She earned her B.A. degree in cultural anthropology in 1974. She was accepted and attended Brown University with the intent on obtaining her PhD in anthropology but left after one year to marry and move to New York with her husband, a graduate student at Columbia Business School. She then went to work at the New York City Department for the Aging, Special Project on Crime Against the Elderly. She then went to work at the New York City Foundation for Senior Citizens. Two years later, James-Brown was hired by the United Way, serving as a planning consultant before being promoted to the deputy director of administration. James-Brown was promoted to director of allocations and agency relations and director of fund distribution and community problem-solving for the United Way in 1985 and 1988, respectively. In 1994, James-Brown was appointed President and CEO of the United Way of Southeastern Pennsylvania (UWSEPA). She was appointed President and CEO of United Way International ten years later. In 2007, James-Brown left the United Way to become the president and CEO of the Child Welfare League of America (CWLA).

James-Brown has amassed numerous awards and recognition throughout her career, including the National Council of Negro Women’s Mary McLeod Bethune Award, B'nai B'rith’s Humanitarian Award and Operation Understanding’s Distinguished Community Leadership Award, all in 1999. One year later, the Commonwealth of Pennsylvania named her a "Distinguished Daughter of Pennsylvania," which honors women of distinction.
She was also the recipient of the Center of Autistic Children Small Miracles Award and the American Society for Public Excellence in Public Service. In 1996, James-Brown received an honorary doctorate from Drexel University in Philadelphia, Pennsylvania. Additionally, James-Brown has served as a White House Presidential Panel Moderator under former President George W. Bush. In 2001, she was nominated to serve as a U.S. Olympic Committee Torchbearer. James-Brown also served as a Red Cross volunteer in the African nation of Kenya.

She has served on a number of governing and advisory boards of organizations including the United Way of America National Professional Council, the Fels Fund, The William Penn Foundation, Public Private Ventures, Eagles Youth Partnership, Vanguard Charitable Trusts, Comcast & NBC Universal Joint Diversity Council, Philadelphia Chamber of Commerce, The Center for Effective Philanthropy, the International Eisenhower Fellowships Nominating Committee, and the Philadelphia School Board. She has one daughter, a son-in-law and two granddaughters and resides in Alexandria, Virginia.

Christine James-Brown was interviewed by the The HistoryMakers on April 30, 2012.

See how Christine James-Brown is related to other HistoryMakers
Click Here To Explore The Archive Today!