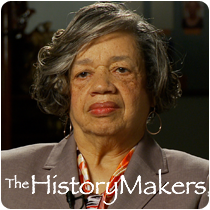 Favorite Color:
Green
Favorite Food:
Jambalaya, Vegetables, Greens, Salads
Favorite Time of Year:
Fall
Favorite Vacation Spot:
Mountains
Favorite Quote:
All things work together for the good of those that love the Lord and are called according to his purpose.

Favorite Color:
Green
Favorite Food:
Jambalaya, Vegetables, Greens, Salads
Favorite Time of Year:
Fall
Favorite Vacation Spot:
Mountains
Favorite Quote:
All things work together for the good of those that love the Lord and are called according to his purpose.

See how Christine Darden is related to other HistoryMakers

Aerospace engineer and mathematician Christine M. Darden was born on September 10, 1942 in Monroe, North Carolina. Darden was the youngest of five children born to Noah Horace Sr., an insurance agent, and Desma Chaney Mann, an elementary school teacher. Darden attended Winchester Avenue High School and then transferred to Allen High School, a Methodist boarding school (formerly the Allen School for Negro Girls), in Asheville, North Carolina. She graduated from Allen High School in 1958 as the class valedictorian and received a scholarship to attend Hampton Normal and Agricultural Institute. In 1962, Darden received her B.S. degree in mathematics education and her teaching certification from Hampton Institute. She went on to earn her M.S. degree in applied mathematics from Virginia State College in 1967, and her D.Sc. degree in mechanical engineering with a specialty in fluid mechanics from George Washington University in 1983.

From 1962 to 1963, Darden was a mathematics instructor at Russell High School in Lawrenceville, Virginia. She continued teaching at Norcom High School in Portsmouth from 1964 to 1965. After completing her M.S. degree program, Darden became a data analyst for NASA at its Langley Research Center. In 1973, Darden was promoted to the position of aerospace engineer; and, in 1989, she was appointed as the technical leader of NASA’s Sonic Boom Group of the Vehicle Integration Branch of the High Speed Research Program where she was responsible for developing the sonic boom research program internally at NASA. She also maintained partnerships with and led an advisory team composed of representatives from industrial manufacturers and academic institutions. In October of 1994, Darden became the deputy program manager of The TU-144 Experiments Program, an element of NASA’s High Speed Research Program; and, in 1999, she was appointed as the director in the Program Management Office of the Aerospace Performing Center at Langley Research Center where she was responsible for Langley research in air traffic management and other aeronautics programs managed at other NASA Centers. In addition, Darden served as technical consultant on numerous government and private projects, and she is the author of more than fifty publications in the field of high lift wing design in supersonic flow, flap design, sonic boom prediction, and sonic boom minimization.

Darden received the Dr. A. T. Weathers Technical Achievement Award from the National Technical Association in 1985. She was awarded the Senior Executive Career Development Fellowship from Simmons College in 1994. NASA recognized Darden with the Certificate of Outstanding Performance ten times between 1973 and 2003. Not only has Darden received the NASA medals for equal opportunity and for achievement in leading the sonic boom program, she is also the recipient of the 1987 Candace Award for Science and Technology from the National Coalition of 100 Black Women, and the 1988 Black Engineer of the Year Award from the publishers of U.S. Black Engineer & Technology magazine.

Aerospace engineer and mathematician Christine M. Darden was interviewed by The HistoryMakers on February 26, 2013.

See how Christine Darden is related to other HistoryMakers
Click Here To Explore The Archive Today!