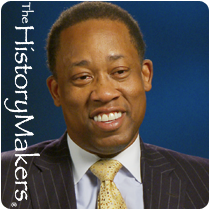 Favorite Color:
Blue
Favorite Food:
Salmon
Favorite Time of Year:
Christmas
Favorite Vacation Spot:
Vietnam
Favorite Quote:
Most People Are Other People. Their Thoughts Are Someone Else's Opinions, Their Lives A Mimicry, Their Passions A Quotation.

Favorite Color:
Blue
Favorite Food:
Salmon
Favorite Time of Year:
Christmas
Favorite Vacation Spot:
Vietnam
Favorite Quote:
Most People Are Other People. Their Thoughts Are Someone Else's Opinions, Their Lives A Mimicry, Their Passions A Quotation.

See how Chris Simmons is related to other HistoryMakers
Donate Now

Corporate executive Christopher Simmons was born on August 15, 1957 and raised in Shelby, Tennessee. His mother Dorothy Anderson was a homemaker and his father Joseph Simmons was a school principal and a minister. He is the third of six children. Simmons attended Hamilton High School where he graduated at the top of his class. He obtained his B.A. degree in economics from Harvard University in 1979. Upon graduation, Simmons began his career at IBM; he then left IBM to take a position at Wang Laboratories where he worked as a senior marketing analyst. In 1986, he earned his M.B.A degree from Harvard School of Business. That same year, he then joined the Bankers Trust Company as an associate. While there, he was responsible for analysis and structuring of large leveraged buyout finances and other transactions.

In 1992, Simmons joined PricewaterhouseCoopers as senior manager, managing mergers and acquisitions with transaction services. In 1998, he managed PwC’s internal merger and acquisitions group. In 2001, Simmons was promoted to managing partner of PwC’s Washington, D.C. Metro area office. In 2004, he was asked by the chairman to serve as Chief Diversity Officer. He also served as chair of the Partner Admission Committee, and as a member of the Human Capital Leadership Team and the Management Evaluation and Compensation Committee. In 2009, he was elected to the firm’s United States Board of Partners & Principals.

Simmons served as PwC’s charitable foundation board president, where he was responsible for PwC’s $750,000 commitment to Feeding America. In 2011, Simmons was honored with the Corporate Community Investment Award, for his involvement in youth mentoring and assisting those in need. His involvement has included the Economic Club of Washington as Chair of the Membership Committee, and the Executive Leadership Council as a board member. He has served as secretary and executive board member of the Association of Latino professionals in Finance and Accounting and is a part of the Federal City Council.


Christopher Simmons was interviewed by The HistoryMakers on May 7, 2012.

See how Chris Simmons is related to other HistoryMakers
Donate Now
Click Here To Explore The Archive Today!