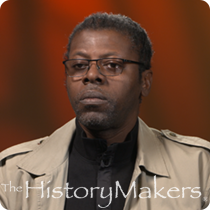 See how Chi Modu is related to other HistoryMakers

Photojournalist Chi Modu was born on July 7, 1966 in Aronbizoug, Nigeria. In 1969, Modu and his family moved to the United States and he graduated from the Lawrenceville School in Princeton, New Jersey in 1984. He earned his B.S. degree in economics from The State University of New Jersey, Rutgers in 1989. Modu also received a certificate in photojournalism and documentary photography from the International Center of Photography in New York, New York in 1992.

His first position as a photographer was with the African American newspaper the New York Amsterdam News in Harlem. In 1991, he was hired by The Source magazine, where he worked as the director of photography. Modu’s photographs were chosen for over thirty different covers. Modu photographed some of the biggest names in hip-hop at the time, including Tupac Shakur, Snoop Dogg, LL Cool J, Mary J. Blige and the Notorious B.I.G. He left The Source in 1997 to work as the co-creative director at C-Squared Studio. During this time, Modu became interested in digital photography sharing and founded diverseimages.com in 1998, which later evolved into ephotos. He also worked for a variety of marketing companies, including as the chief executive officer for REBRAND, as a digital strategist for DI Digital, and as a brand strategist for Diverse Insights. In 2006, Modu joined Diverse Images, Inc. as the chief digital strategist and remained there until 2009. Following his departure from Diverse Images, Inc., Modu began working for DOTGO as a digital strategy consultant. He founded ephotos in 2012, with the goal of making the world’s images accessible to anyone with an internet connection.

Modu’s photography has been featured in multiple exhibitions across the world, including in an outdoor art installation in New York in 2013 and a solo exhibition at the Pori Art Museum in Finland in 2014. His work at both of these exhibitions was later compiled into a book that was published in 2016, titled, Tupac Shakur: UNCATEGORIZED, which features many of his iconic photographs of the rap artist from the 1990s.

Chi Modu was interviewed by The HistoryMakers on April 13, 2017.

See how Chi Modu is related to other HistoryMakers