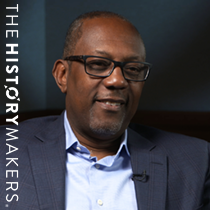 See how Chet Hewitt is related to other HistoryMakers
Donate Now

Nonprofit executive Chet Hewitt was born on November 30, 1958 in New York City to Millicent Braithwaite Hewitt and George Johnson. After passing his high school equivalency exam, Hewitt began working as a YMCA counselor in Staten Island, New York, later becoming a program director at the YMCA. Upon moving to San Francisco, California in the early 1980s, Hewitt worked as an after-school program director, and joined the therapeutic foster parents initiative program. He then enrolled at the New College of California School of Law, where he completed an internship with the San Francisco Public Defenders Office in 1991, before receiving his J.D. degree in 1992.

From 1993 to 1994, Hewitt served as the founding director of the Detention Diversion Advocacy Project for the Center on Juvenile and Criminal Justice in San Francisco. In 1995, he completed a fellowship with the Annie E. Casey Foundation; and one year later, he became an associate director of working communities at the Rockefeller Foundation. In 2000, Hewitt was hired as an assistant agency director with the Alameda County Social Services Agency’s child and family services division, and was promoted to director the following year. Then, in 2007, Hewitt became the president and chief executive officer of the Sierra Health Foundation in Sacramento, where he was also involved with the blue ribbon commission and the steering committee. During this time, he founded the black child legacy campaign. In 2012, Hewitt became president and chief executive officer of the center at the Sierra Health Foundation. Hewitt helped The Center to launch the San Joaquin Valley Health Fund, the Fresno Legal Defense Fund, and the California Funders for Boys and Men of Color project.

Hewitt has received numerous awards for his nonprofit work, including the Black Child Administrator of the Year Award in 2009 and the Robert T. Matsui Community Service Award from the Martin Luther King Jr. Celebration Committee in 2016. Hewitt was also a recipient of the Grantland Johnson Intergovernmental Cooperation Award, and the Urban League President’s Award. Hewitt served on the board of the Public Policy Institute of California, Advance Peace, Grantmakers in Health, Valley Vision, and the Sacramento Foundation.

Chet Hewitt was interviewed by The HistoryMakers on April 5, 2018.

See how Chet Hewitt is related to other HistoryMakers
Donate Now