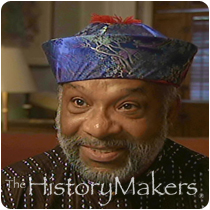 See how Chester Higgins, Jr. is related to other HistoryMakers

Photographer and author Chester Higgins, Jr. was born in Fairhope, Alabama. Higgins’s years attending Tuskegee University in the late 1960s served as his inspiration to pursue a career in photography; during this time, he saw the work of photographer P.H. Polk, a man who would become his first mentor. Polk’s images powerfully impacted the viewer because of the way that they showed the dignity of African American life in the rural South during the 1930s. Hall’s photography, combined with Higgins acquiring his first camera just in time to bear witness to student unrest on the Tuskegee campus, provided the budding photographer with a strong motivation to document the African American experience in the United States as he saw it unfolding around him. Higgins would compile the work Student Unrest at Tuskegee Institute in 1968 about the events that he saw taking place on campus.

Higgins graduated in 1970 from Tuskegee University, and soon after moved to New York City to begin his professional career; his first assignment was to follow and document the political activities of Jesse Jackson, then a young civil rights activist. In 1975, Higgins began his work as a photographer for the New York Times, an association that would continue throughout his professional career. Over the years, Higgins’s photographs were also published in Look, Life, Time, Newsweek, Fortune, Ebony, Essence and Black Enterprise magazines.

In addition to his photojournalistic achievements, Higgins published several collections of his photography, including: Black Woman in 1970; Feeling the Spirit: Searching the World for the People of Africa in 1994; the Elder Grace: The Nobility of Aging in 2000; and Echo of the Spirit: A Photographer’s Journey in 2004. Higgins’s work was featured in a variety of solo exhibits, including the traveling exhibition Landscapes of the Soul, which toured nationally at locations such as the Smithsonian Institution, and the Museum for African Art in New York City. Selections of Higgins’s photography were acquired for the permanent collections of the Museum of Modern Art in New York. Higgins has been the recipient of grants from the Ford Foundation, the Rockefeller Foundation, the International Center of Photography, the National Endowment for the Arts, the American Revolution Bicentennial Commission, and the Andy Warhol Foundation, to carry out his work.

See how Chester Higgins, Jr. is related to other HistoryMakers
Click Here To Explore The Archive Today!