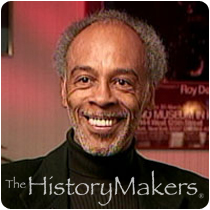 Favorite Color:
Orange
Favorite Food:
Seafood
Favorite Time of Year:
Fall
Favorite Vacation Spot:
Cuba
Favorite Quote:
It Is Not Over Till It Is Over.

Favorite Color:
Orange
Favorite Food:
Seafood
Favorite Time of Year:
Fall
Favorite Vacation Spot:
Cuba
Favorite Quote:
It Is Not Over Till It Is Over.

See how Chester Grundy is related to other HistoryMakers
Donate Now

For thirty years, educator Chester Grundy has been the human bridge between cultures at the University of Kentucky. Born on August 22, 1947, in Louisville, Kentucky, Grundy grew up in the California neighborhood of Louisville. Strongly influenced by a Catholic monk, Grundy professed his intention to join a monastery when he was just fourteen, but had second thoughts when a monk cautioned him that he would have to leave behind Pepsi Cola. Instead, Grundy went to the University of Kentucky. An active member of the civil rights movement, Grundy helped with the establishment of the Black Student Union before graduating in 1969.

Fed up with the racially hostile environment at UK, Grundy planned to bolt to a job at Notre Dame after graduation. Following his father's death, Grundy felt obligated to support his family, and accepted instead a job offer at his alma mater. As the director of the Office of African American Student Affairs and the Martin Luther King, Jr. Cultural Center at the university, Grundy has injected black culture into a campus previously lacking in it. Grundy established the Spotlight Jazz Series, bringing jazz legends to the school, and also arranged for renowned black personalities to speak on campus.

Beyond the university, Grundy co-founded the Roots & Heritage Festival and the Martin Luther King, Jr. celebration in Lexington, Kentucky. As an interim vice president of student affairs at Kentucky State University in Frankfort, Grundy works to span the divide between the predominantly black institution and UK.

Chester Grundy is married and has two adult daughters.

See how Chester Grundy is related to other HistoryMakers
Donate Now
Click Here To Explore The Archive Today!